The Hare With Amber Eyes: A hidden inheritance by Edmund de Waal 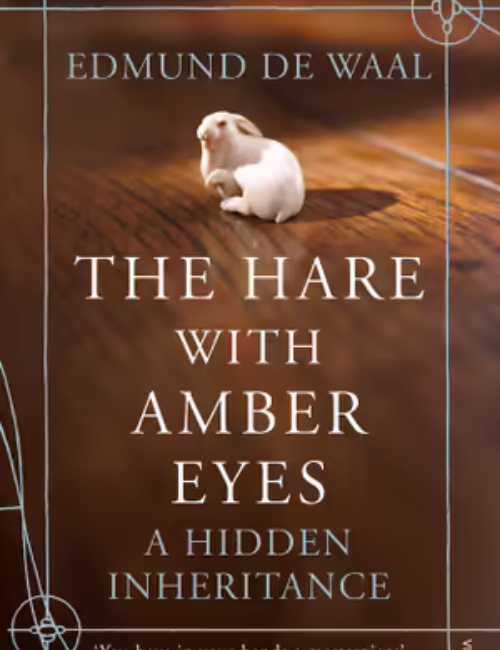 Don’t ask me how this treasure got onto my TBR Pile, I have no memories of that. It is the most amazing story, de Waal uses family heirlooms, ones that were thought lost during the Holocaust but were all saved thanks to a beloved and loyal servant, Anna. I name her as she was loyal to the end, but no-one thought to ask her surname until it was too late. While you might this this article is an ode to a very loyal person it is not, I just wanted to put the information in the first paragraph because she was so important. If she hadn’t been so loyal this book would never have been written.

The author’s family was rich in Europe. Super rich, rich enough to marry into the Rothschild family. Because of that there is a little bit of crossover of information with this book and the one I reviewed about the Rothschild family. The author’s great-grandfather settled in Vienna with his young wife, receiving lots of wedding presents one of which was a vitrine with 264 netsuke. A vitrine seems to be a cabinet, a place to show off your collectables. The netsuke had been collected by Charles (I think an uncle) who felt them a suitable wedding present. They were installed in de Waal’s great-grandmother’s dressing room. They became very important in her children’s lives as they would sit in the room playing with the netsuke while their mother told them stories. Netsuke are made in Japan and have become very collectable. They weren’t when Charles collected them, but became so afterwards. They are about the size of a matchbox and handmade with care and delicacy. If you click on this link and scroll down you can see two video interviews with the author, the second one he picks up a couple and you can see how gorgeous and small they are.

The author uses the netsuke to research his family history. We see how they settled in Vienna, we see how rich they are and then we see how they lost it all in the Holocaust and were lucky to come out alive. What they didn’t lose was the netsuke. And here is where Anna comes back into the story. She was the last one left when the family had their possessions taken away by the Nazis and also left when de Waal’s grandmother managed to get both of her parents out of Vienna. After the war, when Elisabeth (de Waal’s grandmother) comes back to Vienna, she is given a tour of the house, it had been used by the Nazis and during American occupation was also used by the Americans. But Anna was still there, she had managed to secrete the netsuke and hide them. She gave them back to Elisabeth, happy in the knowledge she’d done something for the family.

The netsuke eventually made their way back to Japan with de Waal’s great-uncle Iggie where met and made his home with Jiro. This is where de Waal sees the netsuke and years later where he is told that when Jiro dies they will become his. Possibly the only heirlooms from a once very expansive house covered with expensive furniture and paintings.

This book had me at the beginning and the end, I struggled through the middle. I suspect this is because I’ve read too many books about rich people surviving problematic situations. Rich people who can normally buy their way out of any situation. This time they couldn’t and when the Holocaust finally caught up with them the story took me back and I struggled to put it down from there on.

At that point I could compare it with a Holocaust book that keeps surfacing on my social media, but I won’t because that book will come off second best. You just can’t compare books where the subject was interviewed when he was in his nineties to books where the author has letters from people who were actually there, letters written at the time when they were trying to get out of Vienna.

The author goes through this book searching for his family history. It starts off with a netsuke in his pocket and ends with netsuke, he gets to take them home and install them in his own house for his children to look at and play with. One of the things that really got me was how easy it was for him in England to think ‘I need to see that family house’ and to just get on a plane to another country. That is probably just me being in Australia where it’s just so far from almost everything else and you have to plan to leave the country.

But, I did enjoy most of the book, and I wouldn’t change the bits I didn’t enjoy. They are part of the story. It’s nicely written and I’d definitely recommend it. I feel it would make an excellent book club book, there are lots of things to discuss and lots of history to look at. Just in case you haven’t looked at the videos here’s the link again.