The Rothschilds by Frederic Morton 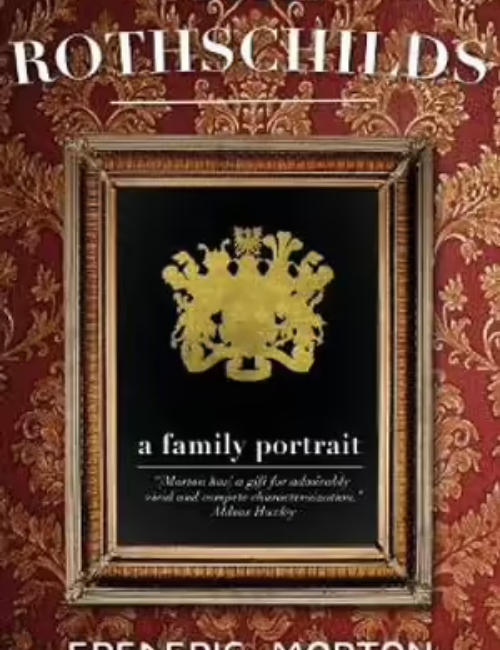 This book is an authorised history of the Rothschild family of Europe. I knew some information about the family from a genealogical point of view as it was part of a session at a genealogical conference I attended some years ago, but very little about the actual reach of the family. I found this book to be interesting and upsetting in turns. It leaves out so much information about the family and about how they deal with what is happening around them, or how they make decisions. Decisions seem to just happen to find their way out of their brains, there is nothing of the thought processes or the family discussion. There is a little information about how the family discusses details from country to country, showing us how some few details of how they encrypted their family correspondence to ensure no-one outside the family could understand what they read. I found the language florid and the choice of words was interesting, some other reviewers have been quite damning in how they view this language. Despite all of that this was an interesting book. It was a good overall view of the family, if you want details I suggest you look at some of the other books about the Rothschilds that are available for sale.

I was horrified at the mysognist view of females. The family started with Mayer Amschel who was born in 1744. He had five daughters and five sons. He built the business up, seemingly from nothing to a flourishing business. The sons helped in the business, having been sent to different countries to start a branch there, but the daughters seem to have been sidelined. When Mayer Amschel wrote his will he was quite specific about giving control of the business to his sons and only a dowry to his daughters. He was just as specific that this state of affairs should continue through the generations and it did. We occasionally hear about a female who does things but it’s mostly about the men and that they’ve made money or are spending it extravagantly.

Speaking of dowries. It’s a rather old concept, I don’t think we have it here in Australia. It’s a payment by the groom to the father of the bride, the more I think about it the more old-fashioned it is because we don’t transfer ownership of our daughters to their husband any more. Some cultures still do that, but generally not ones where we value women and men equally. One of the problems when one family has lots of money is that the dowry becomes very large, and for a groom to be able to afford a dowry of that size they need to also have pots of money. This could be one reason why the Rothschild families intermarried, another is that they wanted to keep the money in the family. It’s not specified in this book.

This book has the first time I’ve seen the words ‘Hepp Hepp’. I’ve heard from my father-in-law that the words mean ‘thank God I’m not a Jew’, but my little research shows that they were a rallying cry in the German Pogroms following the end of the Napoleonic Wars in 1815. The Pogroms were directed at the Jews, I’ve no idea how many Jews were killed or injured but following these riots German Jews attempted to assimilate and integrate into German society to reduce any risk they might have. As we see during The Holocaust, this didn’t help. But back to the book. Mayer Amschel’s son defended himself from the riots by throwing money to the Germans who took the money and ran away. I don’t know what the lesson here is.

The Rothschilds were the biggest train builders in Europe. They missed out in England but took over other countries. What they saw in trains was profit, not a way to let people move around the country cheaply, but profit.

One thing I found so bizarre in later generations of Rothschilds is how they resembled royalty. They had so much money they were able to build huge mansions and staffing them with enough people was probably child’s play to them. But they lived there so long that some of the staff positions became hereditary. There were even silver-polishers and marble-polisher positions which were hereditary. These people took their positions seriously and trained up their sons to do the same job.

I am totally ignoring that this book was published in 1961. We read how the Rothschilds were able to avert wars but not WWI or WWII, but then it stops in 1960. We get nothing after that. For me it’s because I got this book in a deceased estate a few years ago, this genre is one of the things the previous owner was interested in and he might have had it on his shelf since 1961.

Do I recommend this book? It’s really hard to say. It was interesting, I did learn heaps, but I found there was a scarcity of detail and an excess of words which might cover up this scarcity. I’m putting in an affiliate link to it anyway, but it’s up to you whether you buy it or not.