The Declaration by Gemma Malley 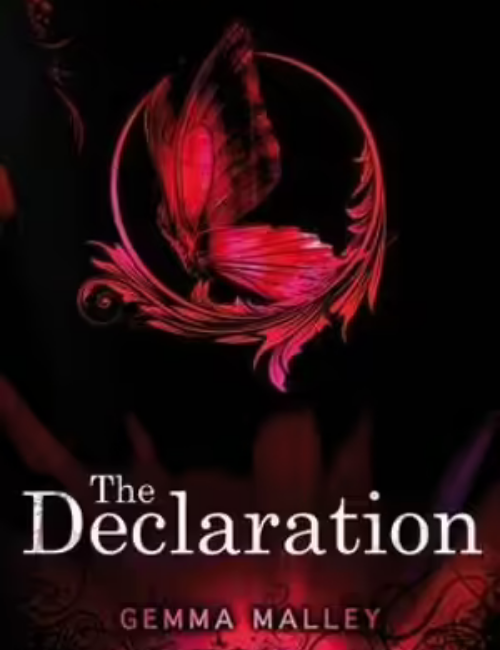 This was one of the books given to me to place in a Little Library. The person also recommended I should read it before sending it off for someone else to read. Holy moley!

This is the story of Anna. She is a Surplus and has been delivered to Grange Hall to be taught how to be Useful. Her parents didn’t sign the Declaration and weren’t allowed to have children, yet they had Anna. When the Catchers found her she went to one of the locations where all Surplus children are sent. We see in first person how unpleasant these places can be and how they brainwash children into believing they are not wanted and that they have to work hard to justify their place in the world.

While reading this book I couldn’t help thinking of The Handmaid’s Tale by Margaret Atwood. They are both dystopian, showing a future differing very much from ours where a segment of the population is marginalised. I read this book with mounting horror as we see exactly how the children are brainwashed.

What the brainwashing techniques remind me of are stories of boarding schools, especially English boarding schools where the boys are brutalised both by the system and each other. Where they are taught to thrash the younger boys and make them slaves. This is illustrated by the game the children play before bed. It is called Surplus, one child is designated as a Surplus, one as a Legal. The one designated a Surplus has to do whatever the Legal child says however degrading and humiliating.

But that’s not what the story is about. It’s more a rite of passage, something that would resonate with many young adults. Because going through young adulthood and coming out the other end a fully-fledged adult and still alive is a rite of passage. Some people find it too hard and don’t make it through, others sail through. And this book would give them much food for thought.

The other point this book is about is living forever. The future we see is one where ill-health is cured and people live forever with just a few tablets taken every day. The downside is one of over population, and in order to deal with the people sign a Declaration that they won’t have children. Those children who slip through the cracks are taught their place in the world and serve until they die. And here’s the question that is asked, would you give up the option of having children if it meant you could live forever? My answer is no, I don’t want to live forever. I am very curious about your answer though, give me your thoughts below, let’s start a discussion.

I did find this book needed a little finesse with its writing. I can’t decide whether it’s because this is Malley’s first book or a deliberate decision on writing style. It could be either. We’re looking through the eyes of a 15-year-old who is not very sophisticated. She’s only been taught to read and write so she can perform her duties when she leaves Grange Hall. As she’s never read a novel her writing would suffer. And that brings me to a point I’ve been told about many times. Some people who write fanfic (fan fiction) don’t read much, and while their ideas have promise their writing lacks finesse, they don’t have the skills to write well; this includes telling the audience instead of showing them, or includes poor grammar choices. I’ve not read their writing, I’m only going by what I’ve been told by someone I trust. This is why I’m thinking Malley might have made the decision to present her book as if the person has few writing skills.

Having said all of that I do recommend this book. I’ll take it to a little library as soon as I can for someone else to read. Here’s a link in case you want to buy it and give me a few cents in affiliate fees.