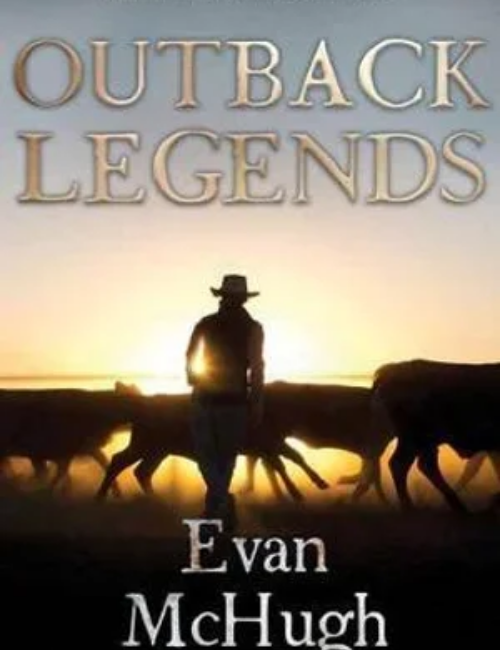 I obliquely referred to this book last week. It’s a good follow on from Harry by Julie Carbone. While Harry gives us a good taste of what it can be like to be a shearer, Outback Legends gives a quick overall view of some outback heroes; people who have been stalwarts in their community and made such a big contribution that they deserve any honours they’ve received from their community and the Australian government. This book makes me want to travel around Australia and visit some of the places mentioned, and to also visit Camooweal for the Drover’s Camp Festival, it sounds wonderful.

What I liked about this book

I’ve discovered books by journalists are nicely written. They do understand useful things such as grammar, and how to put together a sentence so the brain doesn’t have to work too hard to think about structure. It means I’m only reading for content and am not distracted by other things.

The content is fabulous. We get gems such as June Andrew who went to the Marree Health Service Clinic in South Australia for six months probation as a nurse, thirty five years later she’s still there. People like June are the back bone of a community. For many years she was the only medical person this area had. It was just as the phone was installed so people were still using radio to call the Flying Doctor or for some of the medical consults. It sounds as if it’s an incredibly long time ago but in reality this is 1982. Australians will understand how big the country is and how hard it is to have modern conveniences installed, but for people in other countries this will seem very strange. Australia is huge, so big that Marree is 600 km from Adelaide, the capital city of South Australia. But it’s not just a big country, but we have a very small population that mostly lives around the coast. Until a few years ago we had cattle stations that were bigger than Texas. This is why some modern conveniences such as telephones weren’t installed until the 1980s, it is really expensive to install these things into such remote far-flung places. What makes June a legend is what she’s done for the community. She’s introduced activities that don’t include drinking, something that is huge here as drinking is considered a national pastime. She’ll talk to people over a cup of tea and act as a counsellor. She’s even had to treat some horses and dogs.

I have to include Murray Hartin in this list. He’s making a living as a poet. Suicide is quite common in rural regions of Australia. When you put flood, drought and fire into an area it can be really hard to make a living on a farm. Some areas can easily go through all three in one year. Murray’s poems have made such a difference to people that they have changed their mind after listening to his poetry. His words give them hope and keep them living for a while longer. I’d say this is the mark of a great poet. But he’s given me hope and I’ll just quote him

You can be taught how to improve your writing, but if you cant’ write, no-one’s gonna teach you how to write. It’s gotta be in there. You can’t just wish to be a writer and then learn to be a writer. It’s sort of just there; it’s like a destiny.

I’m going to think of this every time I feel my writing is no good. If I believe the words then I must have writing deep inside me and that my uni degree only made me a better writer.

Danielle Doyle is very inspiring. She is part of The Barkly Women’s Group. One of the problems of outback living is that you might not see another female for months, or even years. What The Barkly Women’s Group do is organise days for women to get together and have conversation, wear lovely clothes or buy some skincare. There’s much more than this but it’s hard to summarise one chapter in one paragraph. Danielle also writes a blog, Miss Chardy. She talks about it a little, it’s an outlet for her, but the internet can be a bit dodgy so she gets up early and writes it before people are up. Like me she fumbled her way through figuring out how to do a blog, like me she found Problogger, attended his conferences and has friends she knows through blogging.

One thing that really excites me is the thirty-odd pages of stories taken from interviews with real people. These are people who have been involved with a Bedford Truck called the Ring Pounder, the last one used that is now in a museum. It was made in 1934 so it has lots of stories and this section was just wonderful. It gives corroborating evidence to a story I read in Harry. The shearing team were being driven on this Bedford truck from point A to point B. Hundreds of kilometres between both points. The shearers wanted to get off at the pub, but the contractor didn’t want to stop. A five minute stop could easily extend to a day or two while the shearers got drunk. One of the shearers had the bright idea of throwing a swag off the truck and claiming it belonged to the contractor. Naturally, they went back for it and it took four days for them to start moving again.

Another thing I really like about this book is that McHugh describes how he travels from interview to interview. They’re described as ‘legs’ as in a leg of a trip rather than the legs that people have. They’re good interludes, we get some idea of what conditions might be on the road, or even if the road is barely there.

At over three hundred pages there’s not enough. I could easily read a book on each person rather than a chapter. I’d like to know far more about them, their motivations and how they cope with many of the challenges that come their way.

I now want to follow in his footsteps, drive to the towns he drove to and talk to the people there. I’m desperate to visit the Barkly Women’s Group and see how it works, see ladies letting their hair down and recharging. I’m also in need of visiting the Drover’s Camp Festival at Camooweal. The people attend sound absolutely wonderful and there are bound to be many more stories that need writing down. Sadly, I have too many commitments to up-sticks and follow this book’s course.

I’ll be using this book for Book’d Out’s Non-Fiction Reading Challenge. Click here if you’d like to see what other people are reading for this challenge.

If I’ve made you also want to read this book you can buy it here, every click makes me happy, every purchase gives me a little coffee money.