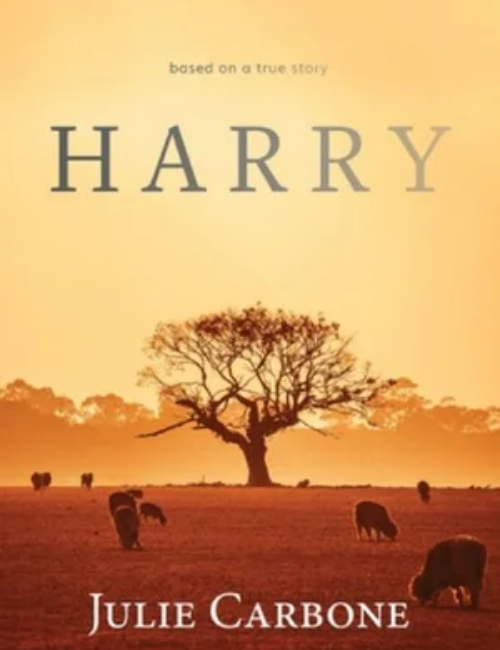 Past me put some money on this book in a crowdfunding campaign. Past me received the book and promptly forgot about it. I must have put it on my TBR Pile and I’m glad I did. Current me is glad I picked it up a few days ago. It was well worth reading and fits nicely with the book I’m currently reading.

Harry is a love story. The love of the daughter shows through all the way through. Carbone has put together a lovely tribute not just to her father, Harry, but also to shearers and shearing in general, and also to religion. Now to explain.

Harry is the story of Harry Hall, Young Harry has a difficult childhood in Adelaide. He’s beset by bullies due to his hearing loss. When he’s not allowed to sign up for the armed forces during WWII he runs away to the outback and starts as a station hand. His lack of hearing does not limit him and he ends up as a Gun Shearer. But he also ends up as an alcoholic, something that he can’t seem to conquer until he discovers Jesus. It’s only when he starts attending Church Services that he manages to kick the alcohol, after that he meets Joyce. They marry and produce a family, although we see very little evidence of their marriage and family, it is there.

It’s always amazing to read about someone overcoming a disability, this book is no exception. It seems to have been tough in the outback during the war and Harry adapts reasonably quickly. He started as a station hand doing all the odd jobs no-one else was assigned to do, but within a short time he knew he wanted to shear sheep. I’ve no idea of the time frame but once he started shearing he increased his skills and eventually he became a Gun Shearer. A person who is the best and fastest in the group. He is given prime position in the shed. That was Harry’s goal and that was his achievement. The numbers he reached in shearing seems phenomenal to me, over 200 sheep in one day! This book shows how proud Harry was of this achievement.

A decent portion of this book shows us how hard a shearer’s life was. They had very few luxuries, the work was backbreaking, and at the end of the working week did very little other than drink. Just imagine a flock of 12,000 sheep. Each one needs shearing quickly before the rains come and make the wool soggy. Wool that is too wet doesn’t shear well and causes problems later on down the line. Each sheep has to be caught from the pen and the shearer has to hold the sheep down while they shear, it’s a one person job. They have to keep the wool in as big a piece as possible, shearing close to the skin while not damaging the sheep. It’s an art, and a skill, and I’m in awe of anyone who can even do one sheep in a day because you do all of that while bending double.

The drink is what caused Harry some problems. We see how he ends up an alcoholic, unable to quit no matter how hard he tried. One day he found Jesus, and that’s where the trouble with drink stopped. Finding religion can be either good or bad depending on the outcome. For Harry it was good, it’s as if it replaced the alcohol in his system. He doesn’t seem to have changed in any other way. And it was through the Church that he met his wife. We see their meeting, and at the end of the book we see a photo of the two of them standing together in 1959. It was a happy ending.

I’m a city girl, born and bred in Melbourne. It’s always a pleasure to find out more about a world I don’t think I can possibly understand. A world drenched in the natural smells of the outback, a world drenched in sweat, and a world where the workers do hard, physical labour day in and day out.

I’m sure you won’t be surprised to find that I’m recommending it for you. If you want to buy it here you’re unlikely to regret it.