Died in the Wool by Ngaio Marsh 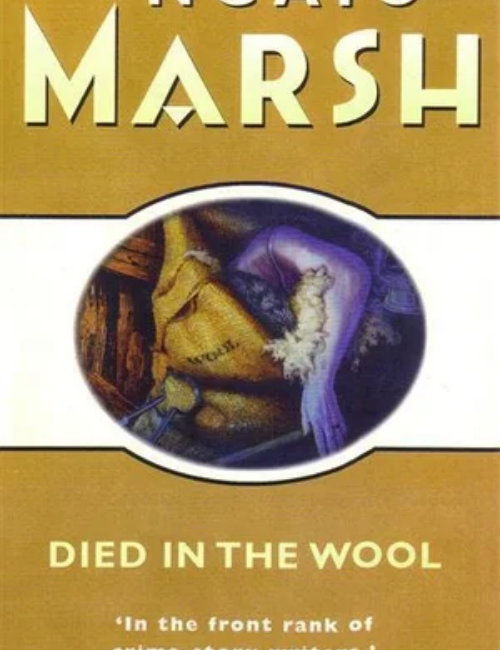 Ngaio Marsh was born in Christchurch, New Zealand. She is one of the Queens of Crime along with other wonderful writers such as Agatha Christie. She was supposedly born in 1895 but as her father didn’t register her birth until 1900 that is uncertain. This was a common occurrence for quite some time in the English speaking world. Nowadays the birth is registered within a day or two of your birth, and most births happen in hospitals. It used to be that the baby was born at home and the birth was registered some time later. It wasn’t uncommon for two or even three births to be registered at once. The dates and years could then be slightly uncertain. This might have also happened in non-English speaking countries but I only know about English speaking countries.

Marsh wrote about a detective, Roderick Alleyn. He mostly worked in London but spent some time working in New Zealand during WWII. Died in the Wool was set in New Zealand. To my shame I missed some of the New Zealand hints and thought we were in Australia. There are many similarities including the way we talk and the fact that both countries have had a lot of sheep since white settlement.

One of the characters writes essays on Elizabethan poetry. He was writing a set of six essays on the pastoral element in these poems. When I read that my mind promptly went back to one subject at university where we learned about pastoral or antipastoral elements of novels. I scribbled a few words back in January 2018 about it and you’re welcome to go read it and see if it makes sense. So it was interesting to be able to look at this word in this book and know I’ve studied it, albeit briefly.

This same character, Arthur Rubrick, also spoke about it

He felt there is nothing new about the country and that we actually move rather parasitically over the earth. I found this an interesting concept in a book written in 1946. Many people were intent on getting the most out of the world and not seeing themselves as parasitic.

I feel this book is poking a stick at how we view women without children. Florence Rubrick was married but had no children, she then threw herself into everything else with verve. That included attempting to bring a child into a class above his station and also it included politics. Marsh, herself, was unmarried. And as she died, unwed, in 1982, she lived at a time when it was expected that women would marry and have children. Societal expectations are interesting creatures. And on page 138 of this publication there’s a treatise of ‘this kind of woman’.

Marsh uses words I’ve never heard of before. One word I even wrote down so I could check its meaning. ‘Megrim’ means depression or low spirits, something that many of us can understand at the moment. Knowing that I find it fits perfectly with my understanding of the sentence. ‘Young Cliff…will, I hope, grow out of his megrim…’ But you’ll have to read the book to understand why he has megrim.

This book comes before Final Curtain in the Inspector Roderick Alleyn series. We see his wife, Agatha Troy, mentioned a couple of times, but it’s before he heads back to London to take up the reins of his old job there.

Should you wish to read it here is a link for you.