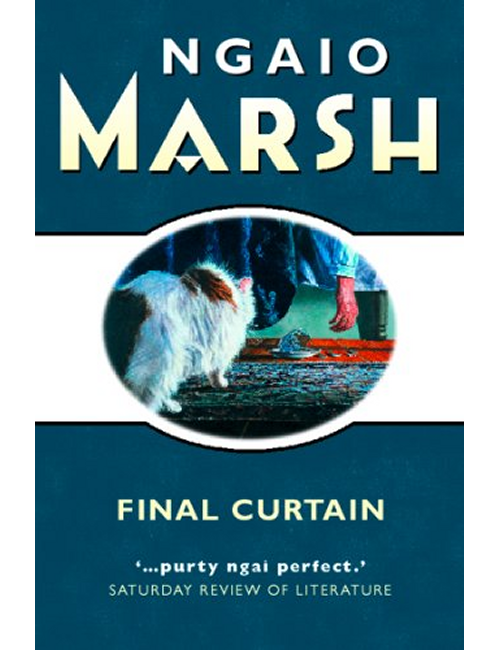 I read this book many years ago. I didn’t actually remember reading it until I was a little way in. And I wasn’t sure about this until the murderer was revealed. That is how long ago it was. I bought this book from a friend who was moving and I didn’t look at the titles, just rattled off the authors I wanted. A mutual friend delivered the books to me and I promptly made room for the entire boxful on my To Be Read Pile. Reading this book was like hooking up with an old friend, one you know you’ve spoken to so many times but the years have passed and the old brain has gone soggy. Things come back eventually as you talk. That’s what this book was to me. I can’t help wondering how much I was paying attention to the words way back when.

The book starts off with the Dramatis Personae just like a play, which is appropriate as the deceased and some of his family are on the stage. The way this family is portrayed they should be put directly on the stage without a script. They are over the top, moody and some of them play practical jokes. Sir Henry Ancred, Bart. is the deceased and the English class system is totally at play throughout this book. Bart. is short for Baronet, a title given to commoners. The family make fun of Sonia Orrincort, she’s a chorus girl, or a commoner and she’s set her cap at Sir Henry. She wants to marry above her station but, funnily enough, the family she wants to marry into are also commoners, they just happen to have a bit of money.

The celebrated artist, Agatha Troy Alleyn, is summoned by Sir Henry to paint his picture in his dotage. As a celebrated stage actor he feels this is his due and as the nation hasn’t delegated someone to paint his portrait he’s getting Agatha Troy Alleyn to do it. She moves into his mansion while painting and is subjected to the family and their doings. The day after the painting is revealed Sir Henry is discovered dead. At first it looks like an accidental death but when anonymous notes are sent to the family Scotland Yard is called in and Chief Detective-Inspector Roderick Alleyn (husband of the painter) takes control of the investigation.

Despite all the family shenanigans this is a fairly gentle murder mystery. The painter and her husband talk gently about the entirety of the case and he makes sure she’s okay with him taking on the case. This points to some background that we don’t see much of in this book. Bearing in mind there are a couple more books in the Roderick Alleyn series it’s entirely possible that background is in one of those.

This is written just after the war and set in England. It goes some way to explain that some people don’t quite know how they’ll manage to hook up with their spouses again after a lengthy break. Chief Inspector Alleyne has been away for three years and Agatha Troy Alleyne worries frantically about recognising him and whether she’ll be able to have a relationship with him. The painting commission stops her worrying as it takes her out of herself and into the Ancred family.

One thing this book also highlights is how some women keep their own name. Yes, Agatha Troy is sometimes referred to by her birth surname, Troy, but other times she is also referred to by her married name, Alleyne. Written in 1947, it’s interesting to see this happen so early. If you happen to know of a book where this topic is highlighted published earlier than this I’d be interested to know it.

And if you’re thinking of buying it then Booktopia could be a good place.