Who Got Einstein’s Office by Ed Regis 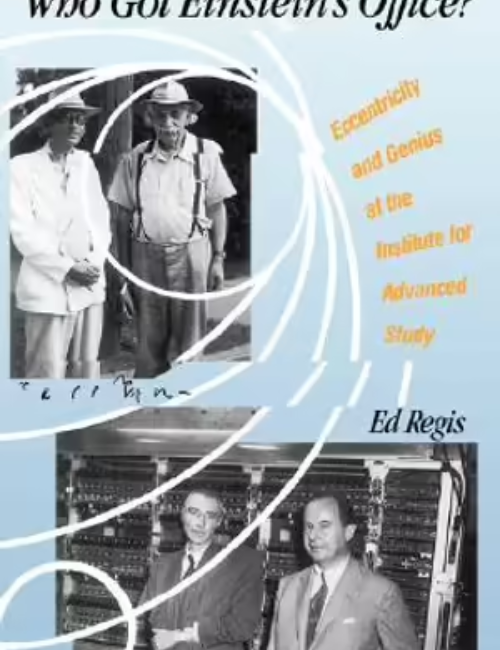 Who Got Einstein’s Office is a non-fiction book about the life of the Institute for Advanced Study located in Princeton. If you’re one of the rabble and you’d never heard of it then you’re just like me. Only I have the suspicion that it might have been mentioned in the book about Alan Turing. As I’m reading through the first part of the book I’m wondering why Turing hadn’t been offered a place at the Institute. And then I find he was offered a place as an assistant after he’d received his PhD at Princeton, but he returned to Cambridge instead. My mind is promptly blown, but then again that happened a number of times while reading this book.

The Institute for Advanced Study was founded by Abraham Flexner who was an unbending educator. Having graduated from Hopkins he returned to his old high school and started teaching. He promptly failed an entire class and was backed by the board. Flexner accidentally found himself starting his own school, it went well, the students even dropping by on Saturdays for a little extra work. This was of their own volition, Flexner was that good at inspiring students. Fifteen years of this and he returned to Harvard, dropping out of a psych degree. After this he did a crash course in medical education and toured the US and Canada inspecting every medical college. The report he wrote helped quack medical colleges fold up and fade away. The quality of medical education increased.

In 1929 Flexner was approached to start a medical college in New Jersey. Caroline Fuld and brother, Louis Bamberger, had sold their business and wanted to use their money for education. Flexner talked them out of a medical college instead offering them a college which had maximum freedom from outside pressures. The result was the Institute for Advanced Study with Albert Einstein as one of its first Professors. This quote from their website explains it better than I:

The Institute is pledged to assemble a group of scientists and scholars who with their pupils and assistants may devote themselves to the task of pushing beyond the present limits of human knowledge and to training those who may “carry on” in this sense.

I really enjoyed reading various discussions about computers. In this respect this book followed on from last week’s book about Alan Turing. We got to see the later editions of the computers working. Finally Ed Regis is writing about computers in the 1980s and these are the bits I understand more about. It was incredibly exciting to read about Fractals and Mandelbrots along with the people who designed them. I’ve had these demonstrated and explained to me many years ago. It was nice to see this in print.

You have to be careful when you’re in an environment that is composed mainly of people who major in maths or science, you never know what their April Fool’s jokes will be like. Don Schneider gave a presentation at the astrophysicists weekly working lunch. He unveiled some information that pertained to a new quasar. He got all the way through his presentation and fielded questions all the time trying to keep a straight face. Part way through some people realise the date, but he’d done such a good job of explaining the charts that he has to explain at the end that it’s April Fool’s.

The thing I had trouble with was the timeline. It wasn’t straightforward, starting from 1930 and continuing on to publication. It went backwards and forwards, and I found it wasn’t always clear which year I was reading about. There was one occasion it had 1986 on one page, but the following page I found unclear. There did feel to be some sort of forward momentum about the narrative, as Regis followed a train of thought, or a person’s story.

I’m really glad I read this book. So much science and maths I didn’t understand, but I’m not letting that bother me. The stories Regis has written about the scientists and mathematicians have brought them to life for me. It was great reading about the machinations and mutinies and how they helped the Institute to evolve. And if you’d like to read the book you can find it still in print.

One last note. A quick google of the author shows me this book – Virus ground zero : stalking the killer viruses with the Centers for Disease Control – which looks really interesting especially with our experience with covid!