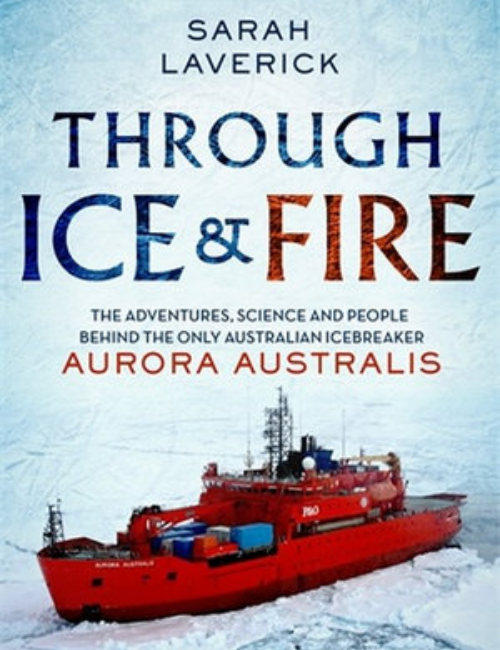 This book is the thirty year history of the famous icebreaker, the Aurora Australis. It was the first and only icebreaker of its kind to be made in Australia. It has a really exciting story, starting with the idea and going all the way to the end of its life. I was captivated by this book from the beginning. There is so much to love.

While it was constructed in Australia, it was designed in Helsinki. The Wärtsilä Corporation was world-renowned for their work in designing ships. But there were issues this time. This was in the 1980s when the internet was not really around, at least, not in the way you and I know. The companies in Finland and Australia couldn’t just email photos of the problems to each other and tell them the issues in a simple way. They used other, older methods. And often the construction people just used their ingenuity to fix things. It did mean that there was a little less space in the area than was originally designed, but when you have two pipes that must meet and it takes longer to get answers as to why things are working than it does to be ingenious then ingenuity will win out. With a build of this size, if you keep going back and forth with little problems then you’ll find yourself way over time and budget.

There was one time when they couldn’t be ingenious. The Wärtsilä Corporation had gone bankrupt, just at the time the Aurora Australis was finished. Normally, you’d be saying it’d be fine, but final calculations were needed. Two of the Australian executives hopped on a plane to Helsinki, found the man who needed to do the calculations and persuaded him to do them. This man sat and did the calculations on his own time as his company had gone bankrupt and this is something they recognise in the book. But if he had refused, then the Australian company would have gone down too and the Aurora Australis would never have sailed.

Other things I took note of

I write this in really cold weather, it’s currently 7°C or about 45°F. In Helsinki this company send their welders home when it gets to -20°C (-4°F) or so, apparently you can’t get the steel hot enough. They don’t send them home because it’s too cold for the people to work, but when it’s too cold to do make the metal do what it’s meant to do.

They had a fire. It isn’t clear to me how the fire started but it was really major. All passengers were cleared to a specific spot where they could be easily evacuated from. There were no deaths and few suffered physical wounds, although frostbite was probably among these wounds as some people didn’t grab enough warm clothes when they left their rooms. However, there were emotional wounds with some people suffering nightmares and insomnia after they returned home. I can understand that, I’ve been hearing so many people having emotional issues due to COVID19, issues similar to this.

I learned about crabeater seals. Apparently their teeth have adapted to let them eat krill. They have lobed teeth which act as strainers, letting the water out and keeping the krill in. I found a cute video of crabeater seals for you to watch which has nothing to do with the Aurora Australis.

I learned a new word. It’s really just a reduced version of an old word but I’d never seen it before. The word is ‘blizz’. It appears to be short for blizzard and is normally used in the Antarctica. I could only find it in The Antarctic Dictionary: A Complete Guide to Antarctic English I loved this idea so much I thought I’d show you the book.

Besides all the history, all the drama and all the excitement I learned one more thing. As I was reading I suddenly realised that this book above all the other books I’ve read in my life should inform how I write my own book. As many people know I’m writing the history of my synagogue. I’ve read histories of organisations before but most of them were rather dry and didn’t show us much in the way of emotion. Through Ice & Fire showed me the way to writing a history of an organisation where the love of, and for, the organisation shines through. Laverick showed me how much to put in and how much to leave out. She also showed me how the parts of the history of my synagogue which I feel need writing but are not really part of the actual history can be displayed. While I loved this book for its history, the drama, the emotion and the love she showed for the Aurora Australis, I will be forever in Laverick’s debt for showing me how to structure my own book.

If you love histories as much as I do then this is a book for you. Here’s an affiliate link with Booktopia, so you can buy it and discover the magic for yourself.

Thank you to Pan MacMillan for sending me this book for review.

One last thing for you. If you’re an 80s music lover you’ll understand this really quickly, if you’re not you can look at this video. I’d been reading the book for a few days, despite the readability I found I had to keep rereading passages. I couldn’t figure out why I had a song about Sara in my head. One day I looked down at the book and it clicked. Brains are odd things.