The Voyage Of Their Life by Diane Armstrong 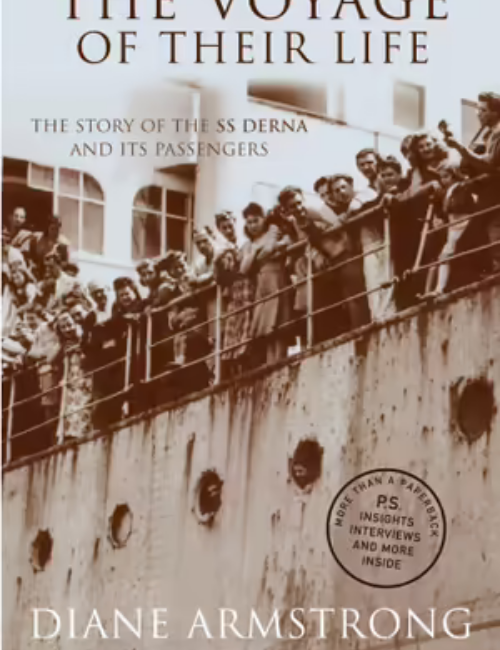 This book has been on my TBR Pile since 2009. I can date it pretty precisely because it comes from my Step-Dad’s library and that’s when he died. I have a number of books from his shelves and a lot of great memories. This book is in the memoir category and has a lot of the elements I want from a memoir. It has a good cast, being a number of the passengers from the SS Derna’s last passenger voyage in 1948, their stories on the voyage and an update decades later of how their life panned out when they got to Australia’s or New Zealand’s shores. The way Armstrong weaved all of these stories, together with how the boat was falling apart was masterful. If I could write my book about my Synagogue with the same mastery I’ll be pretty happy. Armstrong was on this boat as a nine year-old. She tells us she tried to fade into the background and be as little trouble as possible and that’s how she’s written the book. We see as much of her story as we do of many of the other people and no more, she doesn’t grandstand telling us how good she is by writing this book, but just lets the stories come through gently and quietly. Many of the stories tell of hardship and terror, of torture or loss of family, but what shines through is everyone’s strength.

One of things which is both a positive and a negative for me is the number of pages. It’s almost 500 pages and that makes it a bit of a challenge to hold while I’m reading in bed. It’s just a little hard on the hands as I age. There is an ebook which is a lot easier to hold but I had a print book so that’s what I read. The positive is that with a decent number of pages you get to see many more stories and many details that would otherwise be lost in a smaller book.

I’m sure you know of the story of a racist who refused to sit next to a person of colour on a plane. It ends with the captain moving the person of colour to first class with an apology for having to sit next to someone like that. I read a similar story in this book where a Polish woman didn’t want to sleep in the same room as Jews. She was concerned about their germs. In this story the captain took the Polish lady outside and indicated the ocean with the words ‘There’s plenty of room out there, madame’. I can’t help feeling that this might possibly be the original story and that every other story has been changed to suit the conditions the author wants to use. But the problem began with the sleeping conditions, men and women were housed separately using their race as a divider, even married couples were separated. It brought many challenges.

Something that was highlighted a number of times to me in the second part of the book was how easy it was to get a job and how it was possible to survive in those times. In 1995 Armstrong went to Poland and found the priest to whom she owed her life. He made it possible for her family ‘to survive in a Polish village during the Holocaust’. When Armstrong and her family had made it to Brisbane and had started their lives afresh, her father wrote a letter to the priest. He never received a reply because it was dangerous for priests to write to anyone in the West, Communism was making it’s presence felt. But the priest kept it and handed it to Armstrong so she could read it. It’s a good letter and includes things such as how easy it is to buy or build a home with ‘repayments cost no more than rent’ with food being a reasonable cost even for the lowest of wages. This is something that doesn’t happen now. There are other instances in the book where people talk about factory people standing on the dock hoping to employ people as they come off the boat while other people took a couple of weeks to get a job. This is something that doesn’t happen now because we don’t have factories, we don’t have the manufacturing happening which would give many people a job. I know of many people of my age who started out in factories, saved a little money, got some experience in the world and then moved on. It’s really hard to get your first job when the jobs aren’t there. Although, someone is bound to mention fast food places, another place where only a few move up the chain into management.

One thing that stands out to me is the same thing I see in the migrants in my Synagogue. They’ve come here to start a new life and they’ve made the best of what they had here. The buildings were small, dingy and not what they were used to in Europe or Greece. The work was not what they’d been trained for and many of them had no English. But they all stood up and did whatever they could in order to make a new life in a new country. They worked two jobs, they studied, they saved and managed to stand on their own two feet. It’s something I’ve seen with migrants from all sorts of countries who have made their way here with little in the way of funds.