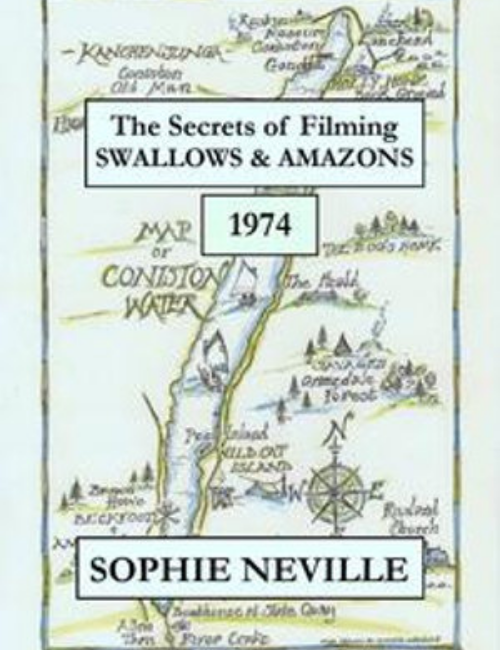 When I was young I totally fell in love with the books by Arthur Ransome. They were gentle fictional novels which really caught my fancy. They are the reason I enjoy rowing, I’m not particularly good at rowing…I’m more in the camp of go-hard-or-go-home and that’s not terribly good when you’ve only got one oar and the other oar thinks you don’t have much strength. Let’s just say we went around in circles, a lot. I’ve always wanted to watch the movie based on the Swallows & Amazons book in 1974. I must have missed it when it screened in 1974; we had black & white TV in those days so I would have missed the beautiful colours. One day I’ll find it and watch it. In the meantime I must make do with the book of the filming by Sophie Neville.

The term ‘make do’ doesn’t quite fit this book. I bought it with a tingle of excitement, and then it stayed on my phone for far too long. Admittedly I was studying most of that time, but it was still far too long. One of the plane flights last year ended up being partially devoted to reading this book. Devoted is exactly the right term. I kept stopping and waving my hand in appreciation of a turn of phrase or of the inclusion of something that excited me. I must have looked rather odd.

That’s a misleading heading. It indicates that there are things I didn’t love about this book and what I didn’t love is that I read it on the plane and didn’t engage the wifi, that’s really about it. This is important in the ebook as there are links for videos. Sophie Neville played Titty, child number three in the Swallows household. She was easily my favourite character in the books and it’s lovely to see her from a grown up Titty’s eyes as well as from the diary that Neville wrote. In order of age they were John, Susan, Titty and Roger. And then there were their rivals, the Amazons, Nancy and Peggy.

The child actors had a chaperone. Someone to look after them and make sure they had appropriate breaks, keep them healthy and ensured they did their schoolwork. Neville’s mother did this job and seemed to do it well. Some of the letters she wrote home show us how she was looking after those children whose health wasn’t quite as robust as others.

We get an idea of the diet that was available for them during shooting. Packet soups, sandwiches and baked beans seemed to cover many of the meals. When Neville’s ‘Mum started to order fruit for us and we relished it.’ the children took advantage and guzzled. And this reminds me I must buy fruit tomorrow.

The acknowledgements are awesome as you get the people who helped by providing memorabilia or advice, you also get a list of the Supporting Artists and the roles they played (for me this is gold, sheer gold), then there is a list of References and finally a Bibliography. Part way through the book I regretted not starting a list of movies and other things of interest Neville mentioned, I got to the Reference list and made one of those excited gestures with my hand. If I decide I have time I can now watch everything cited in the book as all of these are listed here in alphabetical order.

One thing that made me stop and think was in the Where Are They Now chapter. In 2005 Neville met a Harley Street allergist. Dr. Bill Frankland had been a good friend of the real life Roger (Titty’s young brother) he’s the man who developed the Intal spin-inhaler, something I used in the years before this film was made.

What a stupid question. Yes, I recommend it. If you’re a fan of the Arthur Ransome books then this is a good addition. You get the colour and magic of the books, plus you get some interesting information about the making of a programme, plus you get to see the beautiful countryside, plus you get some photos, plus you get links to videos so you can be the closest possible to the area. In case you want to buy it at Booktopia.

And if you have Facebook and want to see the yacht that belonged to Arthur Ransome you can follow this page for all the details. Apparently Neville and a few of her friends from the film bought the yacht and restored her.

And if you want still more you can go onto Youtube to see Sophie Neville’s channel. She has a lot of videos, some of them pertain to the movie while others may not. I’ve subscribed so I can come back later and watch more. Me? Obsessed? Only a lot.