The Saint in New York by Leslie Charteris 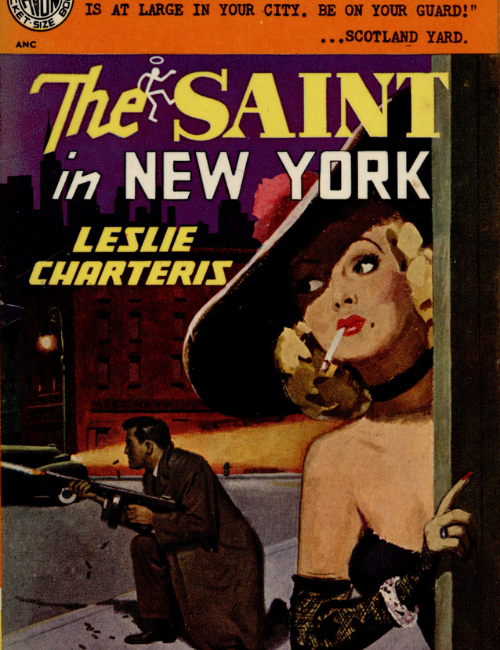 I picked up this book at Continuum in 2019. It was great fun being at a convention for writers or lovers of writing. If you want to attend at some time in the future here’s their website. I did lots of fangirling and squeeing over books.

The Saint has been an institution on radio, TV and movies since the 1960s. There have been a number of different actors playing The Saint, much like the James Bond movies. Both series started life as books before morphing onto the screen. And Roger Moore has played both The Saint and James Bond. Although that has nothing to do with this book, it’s just an observation. But despite all of that I don’t recall actually reading a Saint book before. So back at Continuum I took the opportunity to buy this book so I could remedy that lack of reading.

Seeing as Roger Moore was both The Saint and James Bond I had that image front and centre in my mind all the way through. James Bond movies tend to leave a lot of destruction and mayhem in their wake. In fact, I often feel very sorry for those people caught up in that and wonder how they recover. I suspect I’m not terribly invested in the movies if I’m worrying about really minor characters. From that point of view this book came out well. Yes, there was a little destruction and more than a little death, but those people deserved it, they were taking protection money.

While I was reading the writing style made me think of the hard-boiled detective books. They mostly didn’t refer to women as ‘dames’, but it still felt rather hard-boiled. The main woman in this book was the Big Fellow’s mouthpiece. No-one knew who he was, and all instructions came through her. It made me wonder if she was the Big Fellow at times. When he was finally revealed I found it was one of the people I’d been thinking about which is interesting, I don’t generally pick the right person. Does that mean the book wasn’t well written or I’m becoming a more observant reader. No idea, it’s one of those.

I didn’t make many notes about this book. But there was a passage where The Saint was trying to persuade someone to change his mind. Ezekiel Inselheim had been paying protection money and The Saint was telling him that ‘…to change one’s mind is a mark of a liberal man. It indicates that one has assimilated wisdom and experience.’ I felt that was an interesting method of trying to get information out of a reluctant person. Ignore that The Saint had just brought back most of the protection money and had previously brought back the man’s young daughter. You’d think those two acts would make him give up as much information as needed, but it didn’t.

This book was first published in 1935, with this edition being published in 1955, and it mentions the Nazis and Hitler, giving both of them a poor rap. Not having read the first edition I don’t know if this section was rewritten after the war or if it is the original. If this is as it was first published then it’s very interesting that he knew about Hitler’s Antisemitism and was allowed to published negative things about this topic so early. I mean, that’s before WWII started.