The London Boys: Bowie, Bolan and the 60s Teenage Dream by Marc Burrows 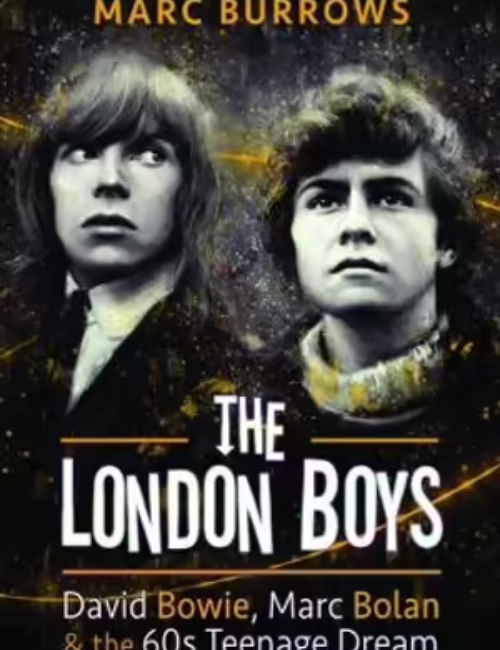 You know those times when you see an author post in a group looking for reviews of a book? And you put your name forward hoping it’ll be a good book? I did that. The topic matter sounded really good. I’d heard good things about Burrows from friends so I felt I’d be making a good decision in approaching the author and requesting a copy. So I did, and it was, so I’m here to gloat.

This book brings together Marc Bolan and David Bowie. We see how their lives intersected and how they influenced and helped each other. We also see their rivalry and how this spurred them on to be bigger and better. I enjoyed learning about all of this, their backgrounds and the name changes. I was too young and only remember Marc Bolan and T. Rex after he’d died. But throughout the 1970s, 1980s, and almost to the present day, there was always David Bowie. Not only was he always there, but he was always ahead of the pack.

This book is a good illustration of the London music scene of the era. Some of the references I’d need to google to understand as I’m not English, but it’s still a very good book. I should have been lying down resting my back, but instead I was glued to my computer screen reading chapter after chapter. I’d been sent a pdf, it gets to me faster than print copy of the book. But there were issues and the only programme I could open the pdf with was my email programme. I just wish to digress and say how much I enjoy using Thunderbird (this is not sponsored, but I wish it were). That’s why I could only read it at my desk. One instance of something that’s mostly British that others may or may not know is rhyming slang. On an early page we’re introduced to the word ‘half-inched’. It’s rhyming slang and it means ‘pinched’, which also means ‘stolen’.

But there are other things in this book that don’t make all that much sense to me in Australia. And that was the London music scene. We’re introduced to ‘Skiffle Players’, a term I had to google. Essentially these are musicians who play using fairly basic instruments, in some cases they’ve made these instruments themselves. If you’ve seen drummers on Youtube playing on upended buckets then you’ve seen Skiffle Players. But this book describes the London music scene better than anything I’ve read to date. It brings the whole thing to life and I’m understanding more now how there were so many fantastic bands from that area and era. When you’ve got so many people all experimenting and trying to be the best they can be in such a small area that’s when magic happens.

I took a few moments from reading to sort out the area of Soho. It’s referenced in so many books, movies, TV serials that come out of Britain and I’ve never known where it was. I probably could have googled it, I’m sure it’s listed in a Wikipedia entry somewhere. But I didn’t need to think about it as the streets are listed quite clearly in this book, along with a good description of what was going on there.

This book talks about some of my favourite singers. They include Tommy Steele and Kate Bush. I love reading about how people got their start with their careers. I’d really like Burrows to write a book about Kate Bush, that’s a book I’d rush to buy. Burrows also mentions Joe Orton. Another person who could only have done what he did in that time and place. You’d need to read this book and then read up on Orton to understand. If he wrote his plays now he’d be considered an also-ran.

Burrows is a journalist. I feel this is made clear in a couple of ways. The first is in the details we’re shown. They make it fairly clear this is a man who knows how to research. I’ve seen this with other journalists who have gone on to write books, they are well researched and there’s no way I’d be able to pick holes in the book unless I know the topic better than them. The other way this is made clear is because Burrows references an interview he conducted with the performer some years ago when he was writing a piece for The Guardian.

I learned a lesson reading this book that I’ll be trying to emulate with my own book. From what I read I feel that Burrows has tried to verify every comment with written documentation. Painstaking work, but some of the footnotes indicate the information was unlikely to be verifiable as the interviewee was going on memory alone. Memories can be great, but sometimes after fifty or sixty years they can wear a little thin.

This has a really good bibliography. All the books, papers, documents and web resources are all listed in the back of the book. If you want to check something, or want to go deeper then the resources Burrows used are listed.

This book needs a heading so it doesn’t get lost. If you’re an old music fan, a young music, a biography fan, or just someone who likes reading this is a book for you. Nicely written, with just the right amount of detail. And in case I haven’t gloated enough I get to say ‘I’ve read the book and you haven’t nah, nah…’ but I’ll give you a link so you can buy it and give me a few cents of affiliate fees. If you’d prefer to buy it somewhere else that’s your prerogative.

I look forward to reading some of Burrows other books, most especially including The Magic of Terry Pratchett (partly because it’s on the shelf behind me) and also any future books Burrows writes.