The Carpet People by Terry Pratchett 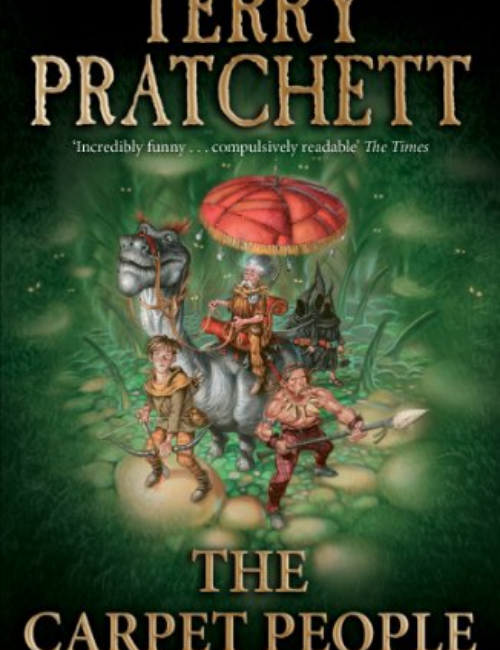 Finally. I can’t tell you how many years I’ve been wanting to write this article. The Carpet People started life as a short story in 1965. It morphed into a book and was published by Colin Smythe in 1971. Pratchett continued his life as a journalist and started writing more books, he eventually became famous enough that his publishers started looking at his back catalogue asking if they could republish The Carpet People. Pratchett looked at it and decided it needed a little massaging. Essentially he decided to change the focus of the book and you can see this excerpt in his Author’s Note in the 1992 edition.

I wrote that in the days when I thought fantasy was all battles and kings. Now I’m inclined to think the the real concerns of fantasy ought to be about not having battles, and doing without kings.

Some of the changes are rather subtle having to do with a change of words while others are quite severe where he changes the entire focus of a chapter.

I wrote an essay for uni a few weeks ago about these changes. I’m giving you some excerpts from my notes here.

1992 is more sophisticated in its word usage, in its phrasing. 1971 P 21 “Weren’t you – weren’t you scared of the eyes?” asked Snibril in awe. 1992 P 28 “Weren’t you afraid of the eyes?” shorter, more succinct, usage of the word afraid instead of scared. No hesitation indicated, no attribution of the question to a speaker. It is assumed the reader understands who the speaker is as there are only two people in this place at this point.

Illustrated by 1971 P20 description of Snibril finding Bane and 1992 P27 when the description of Bane coming out of sleep to pin down Snibril is much shorter and more powerful and more suggestive of action.

Can’t use my notes with this one as I haven’t written anything down. But in order to change things around, to change the focus and to make it a better book Pratchett has essentially taken out whole chunks and replaced them. In the 1971 book the Wights are totally different characters and leave the fighting. In the 1992 book they come to the fighting and join in, not because they feel they have a choice but because their lives have been turned upside down. What do I mean by that? They can no longer see the future and Snibril tells the Wights that they joined him and his cause. When things are safe they then leave as things have returned to normal with them. Can’t give you page numbers as I can’t find this change.

It wasn’t a very good essay. I didn’t get anyone to check it before I submitted it and I find that always means it’s not going to be very good. I did pass and that makes me happy. But 65% is a little short of what I was hoping for.

And if you want to read the updated version you can buy it here.