The Bad-Ass Librarians of Timbuktu by Joshua Hammer 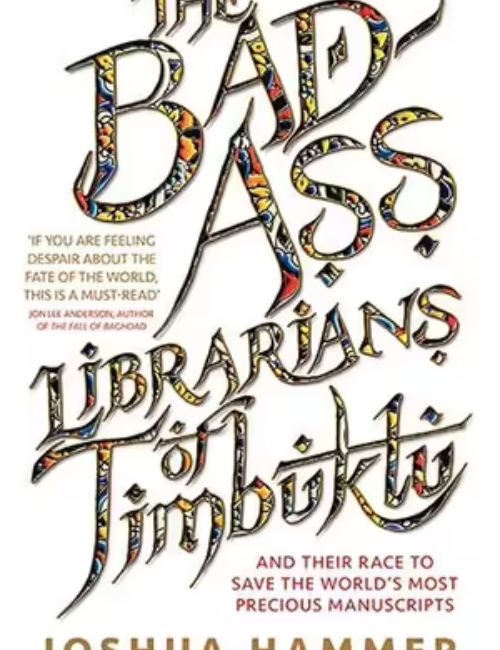 This is one of those books I picked up at the op shop recently. I went in looking for history books and added this to my pile. I picked it up totally because of the word ‘Librarians’ in the title. I’m not at all shallow, if it’s about books I want it. As it turned out this book is one of the highlights of my reads this year. I’m going to put my plug for you to buy it here, it is that good that I’m telling you to buy a copy now. But before you do that, just be aware that this book has descriptions of war and descriptions of Al Qaeda’s activities. It is not for the fainthearted. And you can google the war and find out what you don’t remember about it. I haven’t because time is not on my side at present.

The back of the book has two parts to the description. There’s the three paragraph description that tells you about the book, and then there’s the paragraph at the top that describes the entire in three short lines.

To save precious centuries-old Arabic texts from Al Qaeda, a band of Librarians in Timbuktu pulls of a brazen heist worthy of Ocean’s Eleven.

And they’re absolutely not wrong about that. Essentially, one man heads a mission to save books from Al Qaeda. The books are of wide and varied topics ranging from surveys of algebra, trigonometry, physics, chemistry and astronomy. Some of them were written in the eleventh-century. Some had been copied…by hand. These books were precious to the owners, family heirlooms. Handed down over the generations, copied or not copied. Buried in the sand to protect them from people, from wars, from being appropriated by governments.

In the 1980s Abdel Kader Haidara is given the task of asking people to surrender their books to libraries for preservation and documentation. This was a hard task bearing in mind some of the distances involved. If you google Timbuktu you’ll find it in the middle of the desert. One of the other places named a number of times is Bamako. This is about 1,000 kms from Timbuktu. Many of the people didn’t want to surrender their books, their treasured books. In the end he found the right words and in the end 377,000 books were stored in Libraries in Timbuktu. Many of these were old and frail, they needed to be stabilised, digitised and documented. So many of them are irreplacable.

At one time Al Qaeda decided to follow through on their threat to destroy the books. They took all the ones they could find. They put them on a pile outside and burned them. That was after Haidara had become one of the ‘world’s greatest and most brazen smugglers’. Thanks to him and his assistants Al Qaeda only burned 4,202 books. The rest survived. All of the rest survived.

The books ended up in cases. They travelled by car and by boat and were secreted away in people’s homes. Haidara’s family and family members of his assistants all became temporary Librarians to hide these books and save them from Al Qaeda. It is such an amazing story, my mouth kept dropping open as I read.

As part of the heist they documented what books they were hiding away. At this time there was a curfew in Timbuktu. These amazing people stayed in the Library over night and used torches sparingly to pack away all the books, all the time documenting what they were doing.

Such an amazing story. I keep using the word ‘amazing’ and it’s the only one I can think of. We think of Westerners as being the first to start writing books. In fact, it all started in African nations. They had philosophers, poets, mathematicians and so many more people versed in the sciences. And Timbuktu in Mali was at the heart of it all.

There is a lot of politics in this book. And a lot about Al Qaeda and how ruthless they were. Those parts were the hardest for me to read, the efforts to set up libraries in the first instance and then to set up the rescue heist were easy. I had to keep slowing myself down so I could read every word.

I am so glad I was looking for history books for a different writing project. And reading this book gave me a possible idea for a new writing project. Maybe if I stop reading I’ll stop getting ideas. What do you think?