The Assignment by Liza Wiemer 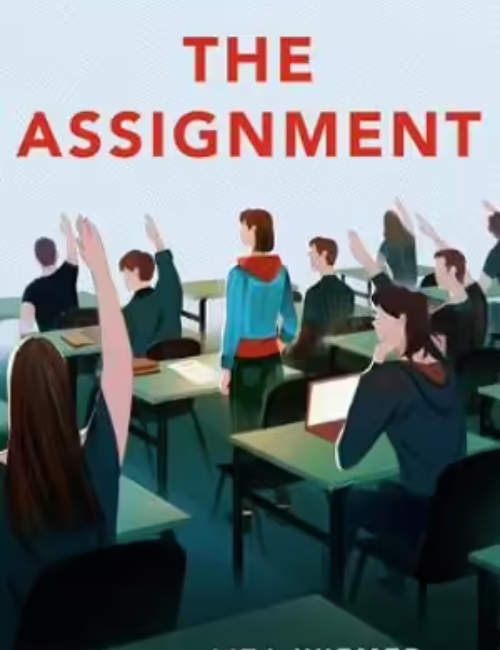 I met this author at Limmud Oz a few weeks ago. She was a really good speaker and it was a pleasure to talk to her afterwards. This book is a fictionalised account of a true story. In the state of New York there is a small town. The students were given an assignment. They had to look at the Wannsee Conference from 1942 and argue either for or against the point of the conference. Two students stood up because they felt the assignment was wrong. Neither of those students were Jewish. Liza Wiemer just happened to be in that small town, Oswego, for workshops for her YA novel, Hello? and also for a book signing in the local bookshop. You can read her story about how she met with one of the students here.

The biggest problem with the assignment is that there is no good side of the argument. The Wannsee Conference was set up to discuss how to kill all the Jews in the areas of Europe that the Nazis had captured during WWII. It was not kill or expel, but kill or kill. So, when the students are asked to exercise their critical thinking they’re being asked which is the best way to kill millions of people. There is no positive position or negative position, just negative positions. And that gives any potential anti-Semite a chance to show off their colours under the guise of critical thinking. This assignment had been on the curriculum for five years.

I remember the furore in the media at the time, but I don’t remember my reactions. The first thing I love about this book is that Wiemer has shown us the story again. It gives us another chance to look at this assignment in the school and see how it could have gone so very wrong. That things went right in this book is because it happened in real life. The assignment was withdrawn and will never be taught at that school again.

I loved the writing. It firmly sets it well within the YA genre. It means that young adults are likely to read it and understand some of the problems Jews can face with antisemitic behaviour. But that means we also see teens in school with their outrageous behaviour.

The tagline speaks to the heart of the two teens who stood up against the assignment. ‘Would YOU speak up for what is right?’ That’s exactly what they did, and I hope learning about two teens who did speak up will help others to speak up in the future.

What I didn’t like about this book. The romance bit. The two teens end up romantically involved. From being best friends to being a couple. Most people know I don’t like romance and if any of my friends had read it first they would have known that would be the bit I didn’t like. I understand these things happen, but some friendships remain platonic their entire life, and this is never shown in novels.

I also didn’t like the antisemitism shown, but it needed to be in there to show the reader what they’re looking at. People are less likely to understand unless they’re shown the behaviour, and so many people haven’t seen it before.

I’m going to end on a positive note. It was really good to see the town rallying around the families of the teens. That showed us the good that can be in people. I’m sure there’s a lot of that sort of behaviour happening in country towns around Victoria at the moment. There’s a lot of water inundating various rivers and spilling out into the towns. There are some people who won’t survive if they’re not helped, and those country towns tend to be full of people who help others at these times.

In case you want to read the book, or just look at the cover you can do that here. It’s well worth it. One final note. While you can google all of this yourself, here is a good starting point.