The Ascent of Everest by John Hunt 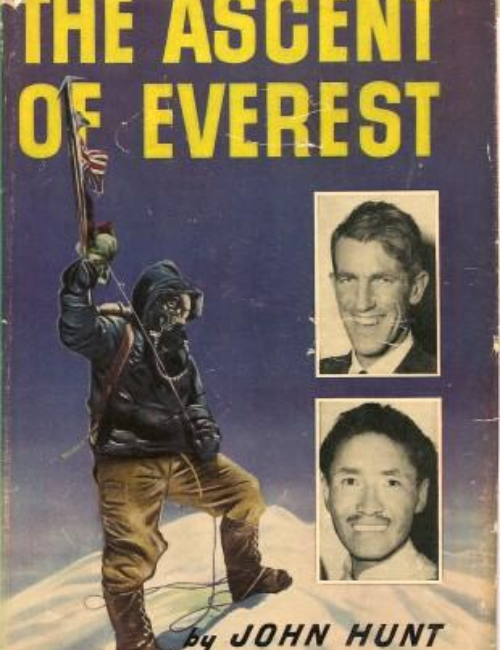 This book had me on the edge of my seat on so many occasions. It’s the story of the first successful climb to the top of Mount Everest. Having read this book I’m pretty sure none of the locals would have made it to the top before May 1953, it’s a thought that was in my mind all the way through the book. I often wonder about locals, and if they would be able to climb with far less equipment than people from other countries, I mean they’re more acclimatised to the area. It turns out that I’m almost certainly wrong. The author, John Hunt, wasn’t in the party of two who made it to the top, but he’s the man who organised and lead the expedition.

But this book is about so much more than just the climb. It includes quite a few pages on how they researched and organised all of their equipment. One element of the climb John Hunt felt was most important and had the biggest impact on them actually getting to the top was the use of oxygen. I haven’t noted which previous expedition made use of oxygen and noted how useful it was, but it’s mentioned in this book a few times. What they did was to have companies figure out which types of masks and which types of oxygen delivery would be best. There’s even an whole Appendix at the back dedicated to oxygen and how it’s delivered.

This expedition was organised military style. There were reports written beforehand about what needed doing, how many people they’d need, how many Sherpas they’d need for carrying food and equipment and many details of the types and amounts of food needed. They learned from previous expeditions where they’d found that Westerners don’t cope with local food. They needed to ensure they had enough food for Sherpas to eat, one of their food basics is called Tsampa and is flour made from roasted barley, but they also eat a lot of dahl (lentils). Us Westerners are not used to that amount of barley or dahl so they would have had digestive issues with large amounts.

We all know Edmund Hillary, a New Zealander, was the only Westerner to make it to the top. And everyone has heard of the Sherpa Tenzing who made it there with him. I want to pay a tribute to the amazing Tenzing. He was on a previous expedition only the previous year with a different team. He seems to have been much, much more than just a Sherpa, he organised the Sherpas and had excellent climbing skills. On a couple of occasions in the book Tenzing and Hillary come back from one of their mini-expeditions in good spirits and good health. They both seem to have outlasted and outstaminaed everyone else which is why they were chosen to be one of the assault teams. At one point he had watched Hillary jump down a big step, but because they were both roped together and Tenzing had ‘strongly placed against a slip on the part of his companion’ he was able to hold Hillary from falling further when the ice collapsed underneath him as he landed. I’d also like to point out the photo in this article. It’s the photo Hillary took of Tenzing at the summit. The only reason we can be certain is because of the photo opposite page 224 in this book. If you look you’ll notice the oxygen equipment and the multiples of clothing etc covering everything.

I did love this book. It will fit nicely next to the other book about mountain climbing I have on my shelf. What I find interesting is that I used this book for one of my regular columns a few years ago. I was anticipating it with pleasure then and it was worth the wait.