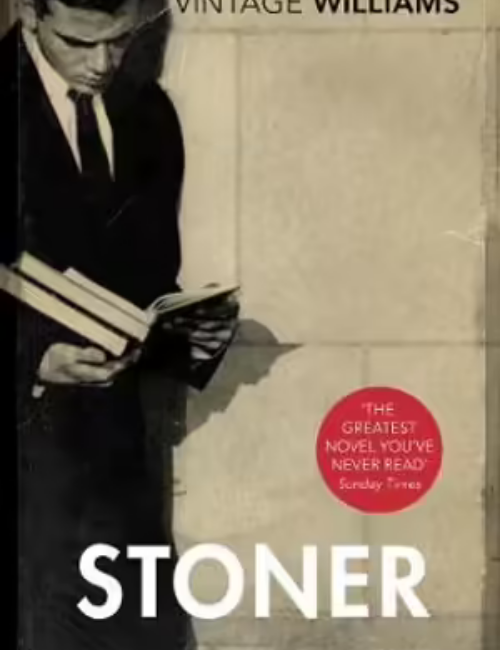 I feel I must have bought this novel when I was at uni. Something I do at odd times is haunt bookshops and the university bookshop was no different. I don’t think it was on one of my reading lists, I suspect I saw it and thought it looked interesting. It’s something I would not have read in a past life but now I celebrate books such as these for how they depict normal people. Don’t misunderstand me, I love reading autobiographies and biographies about famous people. But I also love learning about regular people, those who do normal stuff and how they live their lives. This is just one reason I loved this book. Let me look at other reviewers in an attempt to show you what else I loved about this book.

A little about the book first. Published in 1965, it is about a man called William Stoner. He led an unremarkable life. Starting life as a farmer’s son, he was sent to university to study agriculture. A compulsory part of his course meant he had to study literature for the first time. Shakespeare’s 73rd Sonnet broke through the farming background and he changed his major to literature. He never left the university, going from being a student to lecturing. He married the first woman he fell in love with, she was not right for him. Stoner stayed with her throughout everything, eventually dying in his own house.

The first review I want to look at is a video by Leaf by Leaf published 3rd August 2019. He came to literature while working on his computer science degree. Just like Stoner who was working on an undergrad degree in agriculture and had to take a unit on literature. Leaf by Leaf also discovered the power the written word has and how it can open up your mind. Despite being a reader as long as I can remember I also needed to study at university in order to get some deeper understanding of the written word and how it can inspire so much.

Stan Grant, in his review on the ABC website on the 26th December 2021 hits it on the nail. Stoner is a book he rereads every year around Christmas. There is a word that Grant used which works for me. It is ‘quiet’.

The word that comes to me is quiet. Stoner is a quiet novel.

And the reason I agree with Grant about this is because it’s how the novel hit me. Not that it actually hit me, because it didn’t. What it did is crept quietly into my subconscious with the view of staying there. This book is why I like to read about people. There’s no huge fanfare with Stoner’s life, he just lives life quietly without ostentation.

Staying with Stan Grant’s review for the next point. Grant talks about Stoner’s stoicism. Our lead character, Stoner, does not change his life and leave with his lover, he doesn’t upend everything for everyone else he just remains there. He is the anchor for everyone else around him. He continued earning money, paying the bills and taking on whatever jobs his wife couldn’t do. I see this in my everyday life. I’ve been fortunate, I see so many people doing similar things to Stoner. They have choices, they could leave but they don’t. They stay in their jobs continuing to pay the bills and pick up whatever slack is around them. In this way I feel Stoner embodies everyman who has had to just stay and continue on doing all the things that are needed even though they’d like to leave.

Now I’m going to look at a review by Tim Kreider writing in The New Yorker 20th October 2013. He makes note of two of the characters who are both disabled and talks about them being un-p.c. because they are both ‘evil’ characters. It’s a rather outmoded way of showing disabled characters, but in 1965 when this book was published it was quite common to give your ‘evil’ characters hunchbacks or other disabilities. I noticed that while reading and gave it little more thought than I don’t like these characters being un-p.c. Something this reviewer showed me though, is how three dimensional they are. This is something they have in common with all the other characters. Williams has been quite sparing with his words but he’s still managed to flesh out each character.

This is a lovely book. I had to put it down on many occasions to make sure I didn’t skip anything. When I find I’m skimming the paragraphs so I can get to the next page it’s time to put it down and try again later. It’s a challenging read in that very few happy events happen to Stoner, but it’s in that unhappiness that brilliance lies. There are a few occasions when Stoner has been happy, they are highlighted by the unhappiness. Stoner never gives up, he keeps working on the day-to-day stuff, something most people do. He never tries for complete happiness, something we’re told we need to be. And that’s complete rubbish, you can never be happy all the time, life isn’t built like that. You need to balance the happy with the sad.

Despite not doing terribly well in 1965, this book is making a come back. You can buy your copy here