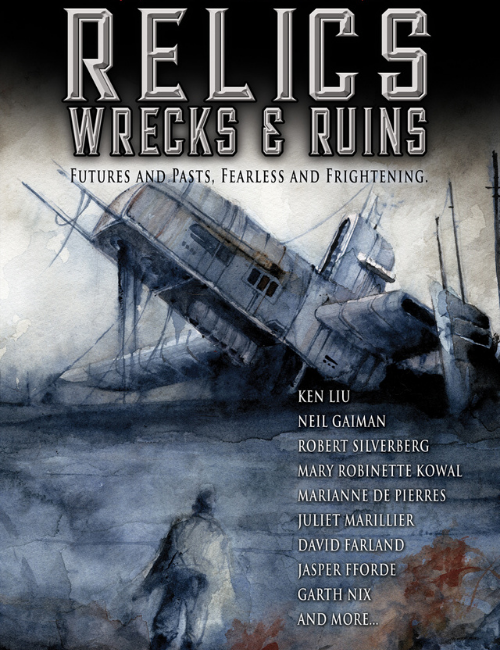 This anthology was gifted to me for the purpose of a review. I don’t always review the books I’m given as I don’t like to write negative reviews but this one was just so brilliant that my fingers have no choice but to type up some words. I had actually promised to publish a review last week but I hadn’t finished so it’s waited until this week.

I love anthologies, they are possibly my favourite form of writing. I’m happy with anthologies written by a single author but I really prefer my anthology to have multiple authors. There’s always the chance you’ll find one treasure, one seriously awesome story that will stand out and make me want to read absolutely everything else that person has written. That didn’t happen in this book.

Flinthart has been diagnosed with terminal cancer. Twenty-four fabulous authors have each written a story for Flinthart, so she can create her last hurrah, a book which has taken its place among my most favourite of anthologies. I almost feel as if each author has reached deep inside of themselves to produce their best work.

When I read an anthology there are always some which come out as the absolute worst, some which I feel don’t quite make the grade. I’m not going to give numbers, but there are always some. There are also two, possibly three which stand out as being absolutely, truly brilliant, those which should mark their authors as people to watch. This anthology stands out because there are only two or three which don’t quite make the mark, each of these is a perfectly good story and in any other anthology they would be in the middle of the pack. What is different with this anthology is that there is no middle. There are the two or three which don’t quite make the grade and then all the others are varying degrees of brilliance ranging to extra brilliant. So many stories took my breath away, many more than I would normally see in an anthology.

And when there are stories I consider bottom of the pack I often wonder if it’s me or the writing. Here’s a for instance. One of the last stories was written by Neil Gaiman. I really struggled with it. He’s a perfectly good author, I’ve read some of his most brilliant writing. So was it me or was it his writing? Hard to say. Gaiman wrote a poem and I really struggle with poems. I did read it, but it didn’t make much sense to me. I struggled through the poetry unit for my degree, I wouldn’t have done it if it hadn’t been mandatory. So, there’s the question. Those few stories, is it just me and they’re actually really good? I don’t know. I’m not going to tell you the authors of the others.

What you will get in this book are the hopes, the remnants, and the fears of humanity. You will get some stories which you will want to read twice, or many more times than twice. You will run the gamut of sci-fi, fantasy and horror, with each one bringing out something that will make you think.

I’m just dropping in the list of authors to try and convince you to buy:

You should be able to either pre-order or buy through this link. Although I was given this book in pdf format I’m considering buying the book to have a physical copy. It’s something I rarely consider as I never expect to re-read a book that I’m reading in eformat. The difference here is what didn’t happen in this book. I said earlier there are normally a couple of stories which really stand out and make me want to read everything that author has written. In this book at least half of the stories are in this category. If I was in the habit of dogearing my books I’d be buying the book and then folding down the pages on each of those stories. That’s a lot of stories…I’d have to read the book again.