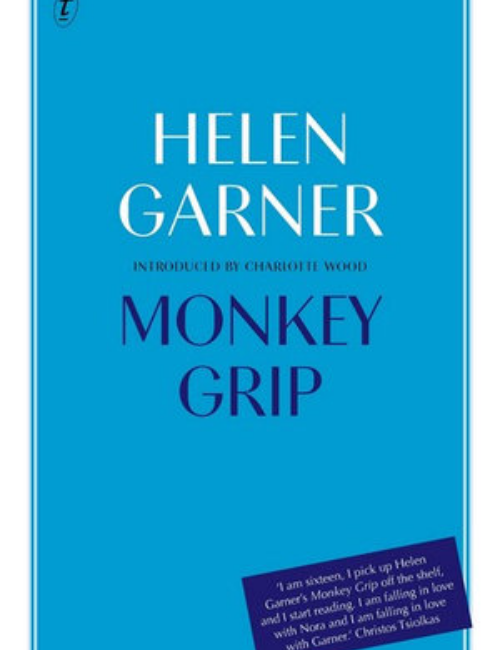 I have this love/hate relationship with Monkey Grip. It’s an iconic book and very important because of how it’s written, that it’s written by a female and that the author represents womanhood in a totally different manner to how womanhood had previously been represented in literature. And I love/hate it (although hate is too strong a word) for much of how life is depicted at that time in this book. It’s the sex and drugs with that very loose grip on relationships that gets me.

What do I love about it?

The writing is so straight forward, it makes it easy to read and easy to approach. It would have been very different to any other book published in 1977. There is no hidden agenda, and no hidden message. It’s just ‘I like this man, he likes me, but he’s flighty and I’m not sure he’s good for me’.

I love how Melbourne is shown in this book. I don’t remember these parts of Melbourne at the time this book was set, but I do remember other parts. And when Garner talks about the heat it takes me right back to coping with the heat, to going out without sandals and trying not to burn my feet, to lying there sweltering pretending to sleep. Of course, the only difference between then and now is that I don’t go out without footwear, I’ve learned not to burn my feet.

Monkey Grip gives a slice of Melbourne at a particular time. From an historical point of view it’s really good to look back and see what was happening here, in Melbourne, at that time. But not only that, it also gives those of us who weren’t in that kind of world some idea of what it must have been like to have lived in the sex and drugs world.

I also loved how real it was, the fact that it was exactly how a person thought and not how an author thought the character might have thought. The reason for that is because Garner published her diary. She got some flack for that as if it were the wrong thing to do. I found a quote on The Guardian website in October 2018. Charlotte Wood wrote about Monkey Grip for its re-release. In that she quoted Garner saying:

I did publish my diary. That’s exactly what I did.

I look at how real it was, and still is and I wonder how much editing Garner had to do to take it from her diary to the complete book it is. It just makes me think about what a good writer she is.

Other stuff I love has nothing to do with the writing. The author’s daughter is Alice Garner, you can see her in re-runs of Sea Change, she plays Carmen, a character I had issues with but as she changed, so did my opinion. And if you watch the movie, Monkey Grip, released in 1982, you can see her again. She plays herself as the daughter of Helen Garner.

What do I hate about it?

Not anywhere near as much as I love about it. And bear in mind that hate is far too strong a word for the negative thoughts I have about this book. What I don’t like is the sex, the drugs and the inconsistent relationships. I mean, I know there are people like that out there and that I know some of them. Actually, I have family members like that, I don’t have to like their lifestyles. What I do find fascinating is to get inside the head of someone who is just so different to me.

And there we go. Just a few words on Monkey Grip. I do heartily recommend it. If you grew up in Melbourne and want to relive it, or if you want to learn about Melbourne in the 1970s then this is the book for you. Here is a link where you buy a paperback copy like mine, but actually far newer.