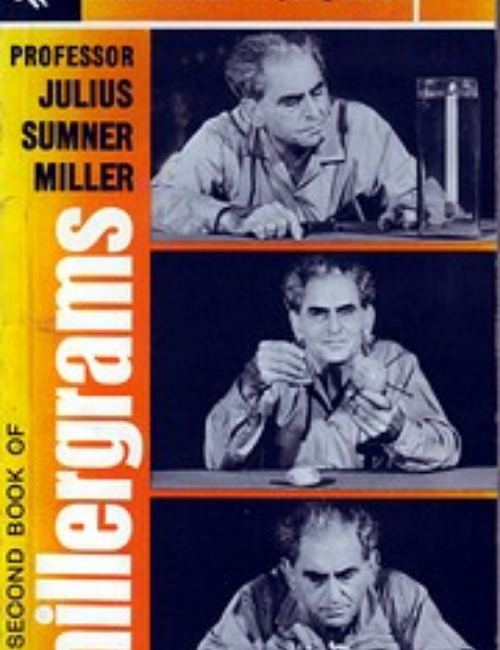 This was going to be last week’s book, but my body decided otherwise. I tripped over my own foot and damaged myself, including making my brain all jangled. I took a few days out just to rest and recuperate, thus you got no words of wisdom from me. Ignore the fact that I just type whatever comes into my head, if you think my words are wise then that’s entirely up to you.

This book took me straight back to my childhood. Some people have the ability to make other interested in what they’re doing. Professor Julius Sumner Miller was one of those. He was an American physicist who made it big on television in four countries outside of America as well as his home country. As you can see from the photo he had a casual haircut and he’s doing science. His television programmes were all about science. He would perform a science experiment in front of the camera and talk about it. He was known for his cry of ‘Why is it so?’

If you don’t remember him you’ll be able to find some of his videos on Youtube. I’m sure there are many people who went into science specifically because they saw him on one of his programmes. I loved to watch him, I never understood any of the science, but I loved to watch. I still love to watch scientists doing science in front of me, but I rarely understand it.

Question 113 is about a glass lense and how you can use it to set things on fire. This method has been used in movies many times, so long as you don’t ask me which movie I’m fine to say that. But the question goes on to ask if you can set things on fire using an ice lense. A lense made out of ice, or frozen water. Yes, I’m belabouring the point as I can’t see whether you understand or not. The answer in the back details how it can work. Now someone needs to put that into a movie!

This book is very hard to find, you can see what I mean by looking at this search. I might keep it on my shelf a while longer.