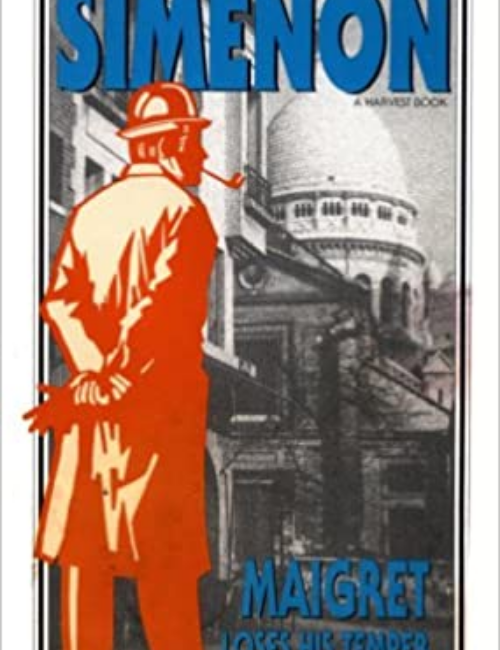 You may have heard of the series of TV movies with Rowan Atkinson in the starring role of Maigret. This book is one of the series of books written by Georges Simenon with Chief-Inspector Maigret as our protagonist. They have been translated from the French, this title was translated by Robert Eglesfield. They are good. Low key, good quality, psychological detective fiction set in the streets of Paris.

I’ve been to Paris, I didn’t really enjoy the experience. It was good to see some of the sights I’ve heard so much about, good to go up the Eiffel Tower and wander through the Louvre. As for liking the city, no, not really. It may have had something to do with the language barrier. I can sometimes get English right, but to remember someone else’s language I find really hard. So we get into Paris and I’m told we’re relying on the two years of French I learned at school many years earlier. Yeah, right…that didn’t happen. So I don’t know if that had anything to do with my not liking Paris. I did like other parts of France but this book is mostly set in Paris so just ignore those at this time.

So, to sit down to a Maigret book takes me to Paris. And bearing in mind this book was written in 1963 it was probably a much simpler Paris than the one I met in 2001. There would have been fewer cars but there would have been some of the wonderful boulangeries (bakeries) that were there tempting my tastebuds when I visited in 2001. Just ignore that I didn’t get a decent croissant in France and I’ll get back to the book.

Maigret is watching his liver. His doctor has recommended he reduce his intake and Maigret has convinced himself he can have one aperitif after weeks of abstinence. He’s at the bar and he’s approached by a colleague with a member of the public in tow. Apparently Émile Boulay has disappeared. He’s a nightclub owner, an honest one, and now he’s disappeared. Some time later he appears again, but he’s dead. Maigret takes up the case and with a lot of legwork finds the killer and figures out why he disappeared for three days.

There are many bits I found interesting. I’ll give you just one illustration otherwise I’ll be here all night and it’s already late enough. Boulay’s brother-in-law is the member of the public reporting Boulay missing. He and Maigret are meeting for the first time and this is Maigret’s thoughts on meeting him.

The name meant nothing to the chief-inspector, but it seemed to him that he had already seen the handsome face of this Italian who could have been a film star. No doubt the red sports car outside the door belong to him. It went with his appearance, with his light-coloured clothes, which were rather too well cut for Maigret’s taste, and with the heavy signet ring on his finger.

In one short paragraph we see how Maigret is the epitome of a policeman. We see that he’s noticed the car outside and that he’s noticed many things about Antonia Farano, Boulay’s brother-in-law. We see Maigret is categorising Farano based on the cut of his clothes and that Maigret’s standards of dress are a little lower than Farano. It’s concise writing without being cluttered by too much information.

If you’ve seen any of the TV movies with Rowan Atkinson as Maigret then you should have a good picture of Maigret in the books. They chose well when they cast Atkinson. The only problem I have is that Atkinson is English. I like to see a French actor play a French man and an English actor play an English man. But going back to Atkinson. He looks about right for the picture I have in my mind, bearing in mind I’ve read some of these books before Atkinson was cast. Atkinson has got the look right and the costumers have got the clothing right.

I’m not going into any more details about the book because I’m likely to move into spoiler territory. Most of the detective work is slow and painstaking. Building up a picture of what happened very slowly one or two details at a time. Finally, an unexpected detail comes to light and Maigret feels he knows the answer. He doesn’t go quickly and arrest the person, instead he puts together more details so he can be sure. I’ve always felt this is the sign of good police work. Make sure everything is correct before arresting the potential culprit so you can be certain the charge will stick.

Here is the link for a large number of Maigret books. I can’t recommend one over any other as they’re all good. There are even 93 ebooks and 13 audio books. I think you can find something there to suit your reading style. If you want to read upside down you should be able to do that with this selection.