I had lunch at Captain Melville’s the other day. It was a lovely lunch and today’s thoughts pay tribute to the staff there as I could eat several dishes with absolutely no changes being made. This doesn’t happen often and I enjoyed every mouthful.

As I walked towards the building this is what I saw.

You can’t see the colour of the bricks but I’ll show you another photo shortly and you’ll get some idea of why I thought it might possibly be an old building. It’s two stories amongst a plethora of high rise buildings and has such character, I loved it. 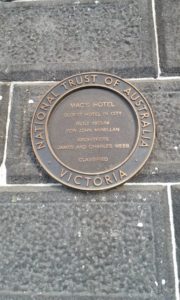 Look at those bricks. They’re bluestone bricks and many of the old buildings in Victoria are made from them. You can visit the Old Melbourne Gaol and also pass by parts of the building that used to be Pentridge Prison and see these bricks still in place. Those two buildings were built by prisoners, there’s some irony there in that they were cutting the bricks that built their own prison.

Have another look at the photo and you can see someone’s gone to a great deal of trouble to make that stone smooth, some of the buildings have been left much rougher.

If you want more information I found a blog focussing on these bluestone blocks. The author is planning a book on the subject, I await it eagerly.

Going back to this building, though. It was built in 1853/4 so it predates my family entering the country. Bearing in mind Melbourne was only starting to be settled around 1835/6 this is one of the very early buildings.

Two other photos for you before I abandon this day’s attempt to be a tourist in my own town. These are horse troughs or possibly stock troughs. I’m sure they’re not the original ones as they were made out of stone but they’re colourful. They always take me back to the earlier days in Melbourne before cars when horses and cattle would have been common sights around the streets. I’m prepared to bet that native animals would have used them too. 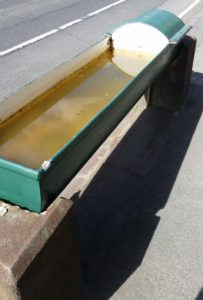 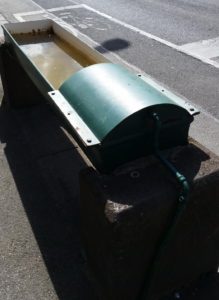 from a different angle