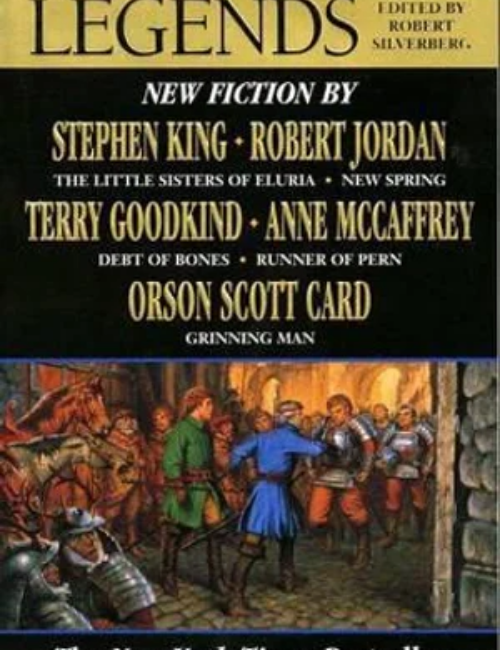 Here we go, back to the books. I bought this book at the market in Cardiff. I had a little time to myself and instead of going straight back to the hotel I was wandering around looking for a shop where I could buy some magnesium sachets. I’d been told I could either buy them online or in the UK. While I never found them I did find Cardiff Market with a lovely pre-loved bookshop where I bought this book. It’s a book I’ve been wanting on my shelves for a while as I already had a book on my shelf labelled Legends II.

I’m not going to talk much about the contents of the book except to say it’s seriously awesome. Each story has been written by a master of their craft and has been written in their world of choice. They give a good taster of each world and if you like the story you’re almost certainly going to like the rest of the books set in that world.

What I am going to talk about is the contents of this book which I’ve pictured below and the contents of the other book I’ve pictured further below. They were both originally published as one book in 1998 in hardcover. Then they were split into two books and published in softcover format with half the stories in one volume and half the stories in the other volume. Just to confuse people totally they were both called Legends.

You can tell by the front cover which authors are featured in which book, this seems to be pretty correct. What is not correct is the Introduction in Volume Two. In this Silverberg mentions Terry Pratchett, but it’s quite clear to any reader that the Pratchett short story is in Volume One. This irritated me until today when I found the photo of Volume One on my computer and then did some research and realised the publisher didn’t have the Introduction rewritten for Volume Two. But what I love about the Introduction is that it has a very short but comprehensive history of fantasy. I’m actually going to lend it to a uni colleague and suggest he read the Introduction, he says he doesn’t like fantasy but I’m going to challenge him with this Introduction. I don’t care if he doesn’t read any of the short stories, for me the Introduction will be enough.

Not being able to find the book corresponding to this second photo on my shelf makes it hard to contrast and compare. I do remember the Terry Pratchett and the Anne McCaffrey stories quite clearly as being in this book which is why I’m confident in putting the photo in this article.

Do not asked me about Legends II that I have on my bookshelf. I can’t find it to confirm what it has in it or if it’s the book in the second photo. I’ve looked and looked, someone else from my household has also looked. Neither of us have found it. Did I lend it to someone? Is it on my shelf and we just can’t see the wood for the trees? I’ve no idea. One day we’ll have time and inclination to sort the books but in the meantime I’m going to continue to be puzzled.

In case you want to throw me a few cents in affiliation fees here’s a link for the book that’s currently on the market as Legends. It seems to include all the stories from both Volume One and Volume Two. I really do recommend it for your bookshelf, unless you don’t like fantasy.