Jews in the Russian Army, 1827-1917 Drafted into Modernity – Yohanan Petrovsky-Shtern 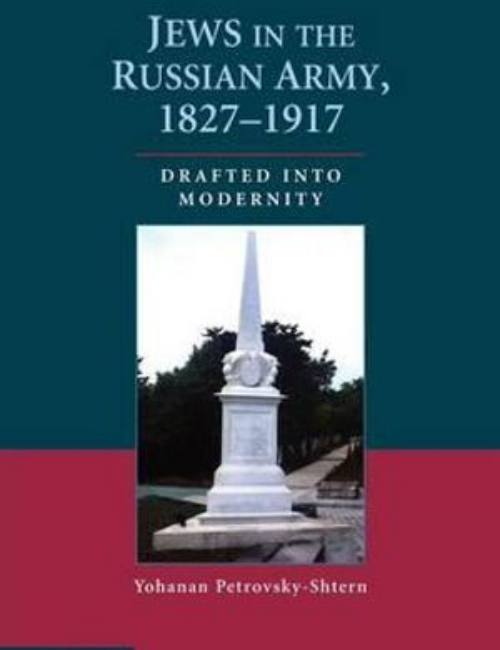 I ordered this during the IAJGS (the International Association of Jewish Genealogical Societies, Inc.) in 2013. We were in Boston and it was a wonderful event. I’m not a genealogist but I accompany someone who is and I’m not about to turn down a trip to Boston. I’m also vaguely interested in history, not only that but we have family stories where one of my ancestors was likely conscripted into the Russian Army. I attended the talk about this book at the conference, it was given by the author and I was intrigued enough to buy the book. It’s only taken me five years to get around to starting to read it and about three weeks to get through it from the beginning to the end of the text. It’s 270 pages in my copy and it was well worth every page.

When you open the book it is structured more like a thesis than a regular non-fiction book. It starts off with an introduction, then there’s seven chapters of dense writing followed by a couple of pages of conclusion. Each chapter is structured like a mini thesis with an introduction, data and a conclusion. And there are footnotes. Sometimes the footnotes are lengthy and sometimes they just refer you to the original text. I loved it.

This book was originally written in Russian. This copy is not entirely the translation of that original as Petrovsky-Shtern took some of the feedback from his Russian readers and incorporated that into the English edition. Not that I can tell the difference but I’m grateful to get the better book.

There are a lot of footnotes. The Russian footnotes are titles of books, papers or archives Petrovsky-Shtern has read. If my Russian were any good (I have one word) I’d be trying to access some of these resources as they sound really interesting. But some of them are in English and the books have fascinating titles, I might try and access some of these in the future. There’s a nice list of resources in the back as well as various indexes which could prove useful to a researcher. What isn’t here is a list of the names of some of the unimportant people. Many people are mentioned within the text but their names are not in the index. Some of these names are ones I know from my friends in Melbourne, I can’t help wondering…. But the fact that they’re not indexed makes it hard to find them afterwards. I’d have to reread the entire book again and write them down.

Reading this book I learned that there was a lot of antisemitism in Russia during the ninety years covered by this book. I’m not sure if the regular people were antisemitic but certainly the people in command, from the Tsar down to some of the people who interacted with Jews on a daily basis. This antisemitism caused so many problems for the Jews but they just kept on trying. The people serving in the army with the Jews seemed to be impressed with their courage and persistence, but that didn’t translate into the upper echelons.

We have many stories of Jews being conscripted into the Russian Army for a 25 year service. The Tsars were trying to integrate Jews into Russian life and make them modern. They decided the way to do this would be to conscript them into the army. That was the intention and it seemed to have gone some way to working but it took ninety years until after the second Revolution. At some stage the 25 year service was reduced to 10 or 15 years. Children as young as eight were conscripted and put into school so they could be educated out of their Jewish ways. It didn’t always happen. There was conversion but it seems that some of it was counting people twice and some of it was forced.

There was a lot of antisemitism in Russia. Jews were only allowed to settle permanently in an area called the Pale of Settlement and there were restrictions even there. Established in 1791 by Catherine the Great and continuing with varying borders in Western Russia until 1917. My family has a rumour that one of our ancestors was a lover of Catherine the Great. Having read this book and seen how much antisemitism there was in that region I now don’t believe it, but it’s a great rumour.

If you’re thinking you’ve never heard of the Pale of Settlement then you’re almost certainly wrong. Almost everyone has heard of Fiddler on the Roof, a Broadway musical and movie made from a series of stories written by Sholem Aleichem between 1894 and 1914. Go and watch the movie. Made in 1971 it’s still a good movie, it’s still around. I don’t think the people sang as they did in the movie but it gets the point across. There, you will get some idea of the Pale of Settlement, how much money they had and how hard life was. That’s where it was set. You’ll see a small amount of the damage the pogroms made and how the edict of the Tsar to evict them from their little village upturned everyone’s lives and spread them to the many corners of the world.

The antisemitism spread to many parts of the army. Each area was supposed to deliver a certain number of people for the army. According to the charts in this book the Jews delivered very close to the correct number, sometimes a little over and sometimes under by one or two people. The army showed the Jews delivered a small percentage of the people they were ordered. Either they had my maths or they stuffed the maths deliberately.

Anyway. There’s a lot more in this book and I’ve spent over 1,000 words already barely touching the topic.

This affiliate link is the paperback edition of this book, but published five years later than my copy. It may mean it’s been updated with further research or it may be the same. You can spend pots more money on the hardcover or get the paperback and make it easier on your hands.