Today I’m going to look at Jasper Fforde’s work.  I know that Suzie has reviewed one of his books, Something Rotten, on this blog and she found it not entirely to her taste.  Hopefully this post will encourage her to try again! 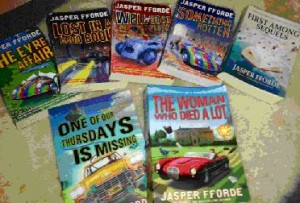 I love Jasper Fforde’s world, but I think that like so many books out there, it all depends on how you enter it in the first place.  Here’s his creation in a couple of paragraphs:

The books are set in England, some in Swindon and others in Reading.  This is the “real” world, but there are some differences.  Toast is a registered trademark, and is advertised heavily – there are even popular chains of Toast cafes.  Cheese is so heavily taxed that you can make a killing if you’re prepared to bootleg it over the border from Wales.  Nursery rhyme characters are real and living among us, playing out their inevitable storylines.  Genetically-recreated Neanderthals are the new underclass, you can buy DIY kits to sequence extinct animals as pets and people go to Shakespeare’s plays not to watch but to vie for the chance to act in all the parts, while the ones who turn up late yell the lines out from the audience.  That’s what captured my heart originally – how I’d love to join in!

I first encountered this “real” world in The Big Over Easy, one of two books set in Reading.  Jack Spratt is a member of the police force, working the Nursery Crimes unit, solving crimes such as the murder of Humpty Dumpty, and hunting down the notorious psychopath, the Gingerbread Man. Jack himself has a closely guarded secret, which would destroy his career should it be discovered.

This book and its sequel, The Fourth Bear, remain my favourites.  They are set exclusively in this “real” world – or so we are led to believe. 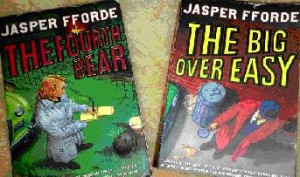 Fforde’s other hero is Thursday Next, a member of the Literary Detectives, who solve book-related crimes.  She moves to Swindon from London to de-stress following a run in with a dangerous criminal.  Working on mundane cases including faked first editions of famous works of fiction, she finds herself unexpectedly pulled into one of the books she is investigating.

This leads to her discovery of a whole new world, BookWorld, in which every book ever written can be entered, and its characters interacted with as if they were ordinary people.  In BookWorld she finds an unlikely mentor in Miss Haversham from Great Expectations and is introduced to BookWorld’s only policing agency, Jurisfiction.  Thursday Next soon finds herself leading a double life, as an agent of both the Literary Detectives and Jurisfiction, juggling her duties as she works to stop rogue book characters from jumping into the real world to cause havoc, and at the same time trying to prevent the mega-company Goliath from her own reality from exploiting BookWorld for its own nefarious purposes: everything from dumping toxic waste in unsuspecting books to stealing the technology from works of science fiction.

I find Fforde’s creations to be complex and beautifully rendered.  Every chapter reveals another layer of detail and the books build on each other, with snippets from one novel lovingly explored in the next, so that his world feels as real as our own.  The characters are lifelike, the plotlines are absorbing and the absurd is so well handled that it is easy to look past (or indeed, to forget for a moment), that you are following the murder investigation of a giant egg, to give one example.

The two Jack Spratt books seem at first glance to be only slightly related to the longer Thursday Next series.  However as you read on, you see that there are more links than first meet the eye.

Apart from the narrative itself, Fforde also brings his world to life in other clever and unexpected ways.  Read the advertisements in the back of Fforde’s books and you will discover that they are part of the fictional world.  Fforde also has an interactive website, and most of his books note at the beginning that the book has been “bundled with Special Features,” making the fun of the story continue past the last page.  There are even book titles listed in his “By the same author” section which don’t actually exist – and if you read the ones that do, you will understand why.  Though I am disappointed that I will never actually get a chance to read The Great Samuel Pepys Fiasco as I am sure it would have been a great yarn. 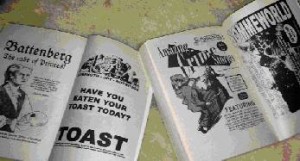 Suzie has blogged in recent weeks about the upcoming enhanced reading experiences being offered by Amazon’s ebooks, with special features to readers available just as they are in DVDs.  Fforde has already embraced this philosophy with nothing more technological than a paperback book and his readers’ imaginations.

I have a very soft spot for Jasper Fforde.  I have not met one of his books yet which I haven’t enjoyed, though I do have favourites.  Even his one-off, Shades of Grey, though completely different in style and scope to his other creations, is clever, gripping and highly enjoyable.  The man’s imagination is impressive. 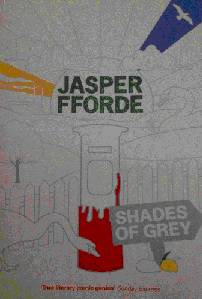 My recommendation would be to read The Big Over Easy first, to ease yourself into it.  Then, starting with The Eyre Affair, read the Thursday Next books in order – otherwise you are likely to get caught out on the ever-twisting plotlines.

Happy reading!  And thanks, Suzie, for letting me waffle on at your place.