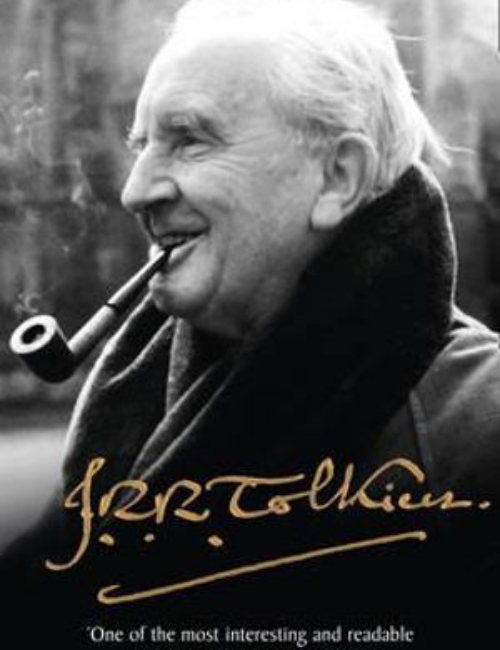 This is the biography of Tolkien I should have read many years ago. It has all the information I’ve been wanting to know. It also answered the question many people have been asking about both The Hobbit and The Lord of the Rings, that of why were there so few women written into the stories.

J.R.R. Tolkien was just an ordinary boy with an extraordinary love for the stories behind the stories, and an extraordinary love for languages. He loved both of these things so, so much that he devised several of his own languages, including writing his diary in one of them. This proved problematic. Devising a language takes time and experimentation. Tolkien sometimes changed his mind on what a word actually meant or how it should be spelled and that change is reflected in his diary partly with his word choice.

While he was going through this period he also wrote many legends behind the story. This became The Silmarillion. Many people think it was written after The Hobbit and The Lord of the Rings, but they’d be wrong and this biography illustrates this very point on many occasions. Tolkien was adamant The Silmarillion be published and tried to include it in his contract. The publisher eventually gave in as he wanted more of The Hobbit story.

Tolkien was such a perfectionist that The Silmarillion was not published in his lifetime. He found himself unable to complete it. We have his son, Christopher Tolkien, to thank for the publication of this vast and important body of work. Following in his father’s footsteps, he lectured in English Language in New College, Oxford between 1964 and 1975. Sadly, Christopher Tolkien died this month, but he was given the Bodley Medal to recognise his outstanding contributions to literature, culture, science and communication. If you check, you’ll find he’s also responsible for collating much of his father’s other works, not just this one book.

I’ve seen much written about the lack of women in Tolkien’s works. They think he didn’t know much about women and while it may be true, that’s not the reason there were so few in his works.

Tolkien made some very good friends in university. They met weekly for discussions on many things to do with literature. They all served in the war with most of them not coming back. He wanted to remember them and so we wrote a ‘boys’ own adventure’. I can’t say how much of his friends were depicted as people in his works but essentially he’s remembering his friends and the good times he had with them.

All of this information and a whole lot more besides is depicted within the pages of the biography. The first chapter shows us Tolkien as the author illustrates both Tolkien and his wife during a visit he makes to them. We actually get to see Tolkien!!! I must admit I read that first chapter and promptly had to close the book and let my inner fan girl have a few moments – it was very emotional.

Humphrey Carpenter has since written a number of other books. Just perusing this listing on Booktopia I find more books of his I would really like to read. If you want you can even buy J.R.R. Tolkien: a Biography and find out why I’m raving about it.