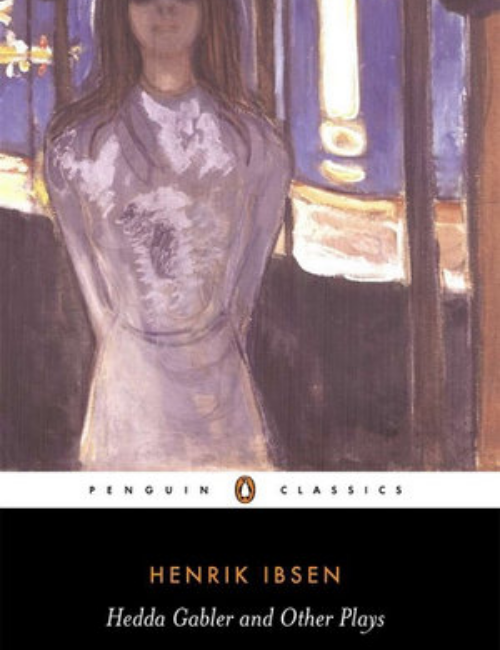 I’m not a play reading person, but when I was given some boxes of books from a deceased estate I couldn’t help picking the eyes out of them before passing them on. It turns out the deceased had a literary bent as well as being able to read several languages. I passed on all the French, Italian and Romanian books but kept many of the literary books in English. I groaned as I added around thirty books to my To Be Read Pile but it couldn’t be helped, they look to be such good books. One of these books was Hedda Gabler and Other Plays by Henrik Ibsen. I read it, I enjoyed it.

If you’ve not read Ibsen before then I highly recommend it. These three plays are an insight into society of that time and place. Ibsen mostly set his plays in Norway but I struggled to place it there. Reading the English translation didn’t help but I really kept placing it in an English speaking society. The first play ‘The Pillars of the Community’ showed us how society can look up to someone who they feel is a good role model only to find that this is founded on a lie. Then we have ‘The Wild Duck’ which shows us that sometimes it can be detrimental to uncover the lies. Followed by ‘Hedda Gabler’, possibly Ibsen’s most famous work which shows that people aren’t always nice.

Each of these plays is incredibly readable. I read them as novels rather than plays, often forgetting to read the name of the character and going straight through to the dialogue. I was able to keep the people straight because it was so well written, each character seemed to be different enough that I could easily ignore the names.

For me, this was an eye opener. It’s something I should have been reading with more care as it could almost speak to my current uni subject but I had trouble keeping that in mind. I’m currently studying scriptwriting, while this has more to do with movies than plays there are enough similarities that I should have paid more attention. This is most especially as in my regular writing I rarely use dialogue, in scriptwriting we need to focus on dialogue. But I had trouble bearing all that in mind as the plays were just too readable. I went from one to the other gobsmacked at what I was reading and emotional at the emotions coming through.

There are morals to each story. The one I want to look at a little without too many spoilers is ‘The Wild Duck’. Gregers Werle decides everyone should tell the truth and that true marriage is one based on absolutely zero lies. He decides his conscience needs to be completely and one hundred percent clear on this. When he discovers some lies in a friend’s marriage he feels the need to tell him, to expose the lies and to have his friend’s marriage continue on the basis full disclosure. You and I know this is not always a good thing, especially without counselling, but in the confines of the play there is no counselling, in part because it was written in 1884. The end is explosive and shows us why some lies should be left uncovered.

Yes, I do recommend Ibsen. He is an inspiring playwright and easy to read. Here is an affiliate link so you can buy a copy for yourself. There’s a reason Ibsen is studied a lot and I really do suggest you read it for yourself.