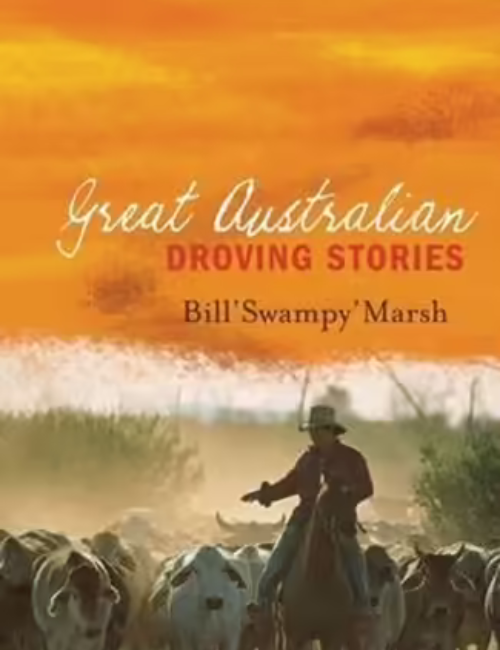 Droving is an almost outmoded way of life. Their job is to take sheep or cattle from point A to point B ensuring they arrive in good condition. Sometimes it’s because they’re sent off for sale, other times it’s because the area where they live is in drought and there’s more chance of food on the road. Drovers tended to move sheep or cattle between each place on foot, not the drover’s feet but the animals. The drovers had horses to ride. A lot of the animals are now driven on trucks or on trains, it means they get to where they’re going much faster, but drover’s are now out of jobs. This book is dedicated to preserving many of the drover’s stories.

These stories have been told to Bill ‘Swampy’ Marsh. They were told to him by white people, Indigenous, male and female. We get to read many different stories from a wide variety of people.

There are a number of stories about the dogs who are absolutely necessary for droving work. Some of them are seriously good at their job and need little training, others need years of training. One story illustrates how an eighteen month old border collie, he was bored at home as there was no work. He was given to our narrator to see what he could do and the dog rounded up all the sheep that had gotten loose during the night and brought them all back. It reminded me of a programme I watched recently called Muster Dogs. It’s on ABC iview, a lovely series to watch. They take five Kelpie puppies from the same litter and give them to five different people for training. I loved watching it.

In another story the author is told he doesn’t need dogs. Tommy used to live near the bridge at Longreach. He had three wethers (rams that have been castrated). The wethers acted like dogs, except that instead of being behind the sheep they went in front of the sheep. These three wethers led about 14,000 head of sheep over a bridge. Yes, they had to divide them up into three lots but the wethers led the way. Took about an hour to move all those sheep.

One story is placed in Tasmania. They end up training the cattle to come for food when they tooted their horn. But the drought keeps going and they’ve been offered agistment near Ringarooma, about 100 or so kilometres away. The feed on the block was better but the fence was not so good. The local police called within a week to advise the cattle had been getting out…a lot. So they drive to the block and the cattle don’t come when they toot their horn. They do notice the local coal train is tooting it’s horn a lot. Apparently the cows were surrounding the train, the train driver was tooting his horn to scare off the cows but the cows were used to coming when the car horn was tooted.

I loved this book. I am saddened there are so few drovers around, but very happy that their lives have been immortalised in this book. What it shows me is that I’ve led a very quiet and sheltered life in comparison to these people who have put their lives on the line to transport animals from one place to another. If you want to read more the book is for sale here.