Just because I’m really organised I’m doing this today instead of combining it with yesterday’s post.

I’m very excited to have been given two Bananagrams to giveaway. If you look at the photo below you’ll find some of the letters from Bananagrams scattered on my table, your task is to make the longest word possible from these letters and post it as a comment. You may only use letters in the photo, you may not use any letter twice and I won’t allow any punctuation. I must be able to find your word in a dictionary, I favour the Merriam Webster. It would be nice if you also followed my Facebook page.

You have until midnight AEDT Friday 13th December 2013 to get your entries in. If there are multiple words the same length the winner will be drawn at random by me literally throwing the words at someone until they catch one and only one. I’ll do this at the new Discworld klatch on Sunday 15th December at Notions Unlimited and post the results the following day. Only open to Australian residents. 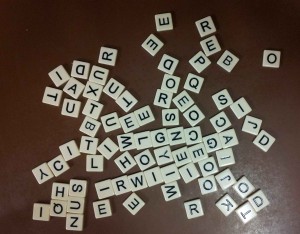 If you don’t win you can always buy Bananagrams at your local toy shop.