I’m officially excited. I know, I’ve been officially excited by many things over the past year or two but this time it’s about my blog. This weekend is the Eighth Anniversary of this blog. It’s very exciting and without the writing here
I would not be at uni and I would not have a short story published.

As always at this time of year I like to celebrate with a giveaway. This year I’ve been given one weekend family pass to give away, valued at $150 by Oz Comic-Con to giveaway to one lucky person. It’s only going to be valid for Melbourne July 1-2, Brisbane September 23-24 or Sydney September 30 – October 1. But if you’re in Perth or Adelaide or even overseas you won’t completely miss out on a prize as I’m giving away one digital copy of Andromeda Spaceways Magazine.

What you need to do is Tweet, Facebook or comment below in order to enter. The winner will be chosen entirely at random, whether I use Rafflecopter’s randomising feature or throw pieces of paper at someone and see which one they catch will depend on my time.

It closes midnight Sunday 30th April 2017. Entry is permissible to people world wide, if you’re in Perth, Adelaide or overseas you’ll win a digital copy of Andromeda Spaceways Magazine provided by me. Entrants in Melbourne, Brisbane or Sydney will win a weekend family pass to Oz Comic-Con. 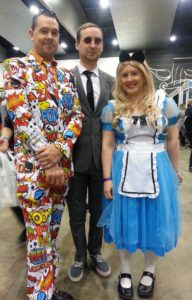 As you can see from some of my photos from last year there will be lots of cosplayers. I’ll be there taking many more photos and interviewing as many people as I can. The questions are brewing in my brain as I write.
a Rafflecopter giveaway