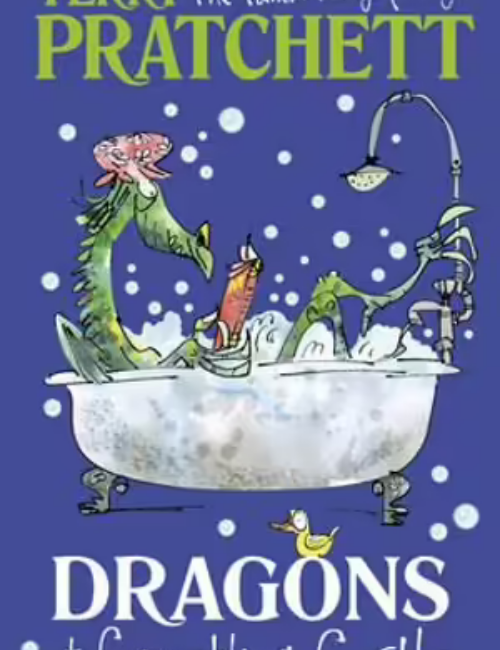 Pratchett was putting The Carpet People short stories into a novel format behind the scenes. Fast forward to 1971 when Colin Smythe decided to publish the novel. Fast forward even further to 1991 when Pratchett’s current publisher decided that as they had been receiving lots of inquiries about the book that it might be time to republish. 43 year-old Terry Pratchett couldn’t resist messing with the book to make it better.

But each story does show that Pratchett was already wanting to change the traditional story. I’ll take the first story for an example and there will be spoilers, but I won’t talk about any other story.

The ‘Dragons at Crumbling Castle’ is set in King Arthur’s time. When it was normal for knights in shining armour to be sent to do deeds of derring do and whatnot. So the dragons had invaded Crumbling Castle and King Arthur sent Ralph to kill them with the words

‘Well then,’ said the king. ‘Ralph, how would you like to visit Crumbling Castle? Nice scenery, excellent food, only a few dragons to kill. Take my spare suit of armour – it’s a bit roomy, but quite thick…’

I ask you, would any other King Arthur story have the king speaking in this way?

I ask you, would any self-respecting fantasy author write a story where the knights don’t get to fight the dragons? Oh, hang on, this is Terry Pratchett, it’s exactly the sort of thing he did throughout his writing career. It seems he started doing this rather early. You can see this in many of the other stories in this book and also in the Discworld series. It seems to be what he specialised in, taking a story and looking at it in a totally different way.

The introduction to this book does suggest that the adult Terry Pratchett did very little editing of his stories to be able to have them publishable in an anthology. I’d love to know if this is true or if he’d edited rather heavily. It’s just a little challenging to find the stories online. Unlike Australia, Britain doesn’t have a resource such as Trove where you can read these stories. I have found someone who tried doing this just with these stories. I’ve even downloaded some of them, I just haven’t read them through to see.

Here is a link in case I’ve persuaded you to buy this book.