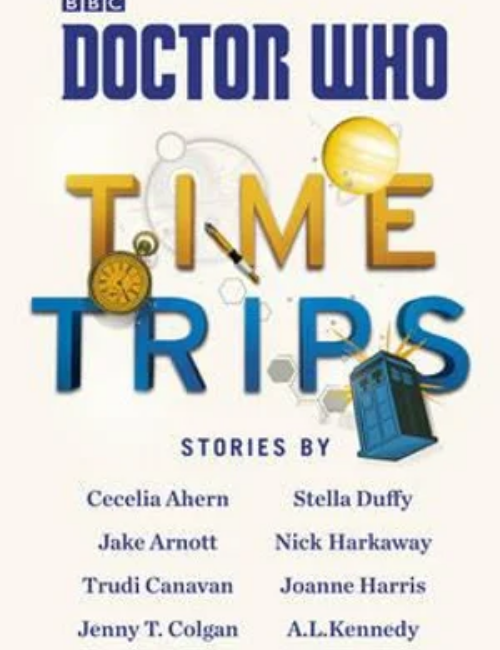 I love anthologies. I’ve said it before and I’m sure I’ll say it many more times. This book is no exception. There are eight stories, eight different incarnations of Doctor Who by eight really brilliant authors and they all fill a need in some form or other. I bought this from the Doctor Who Club of Victoria at Oz Comic Con in 2019, supposedly to help with their fundraising, in reality to feed my reading addiction.

The stories were written by:

I could spend a lot of time writing about each story but that’d be spoilers and you might not want to read the book. Instead I’m going to dip into Trudi Canavan’s story. Looking at one story does not give you any indication of the writing style of the other stories, hopefully you’ll want more.

‘Salt of the Earth’ is set in Australia. The Doctor has promised Jo Grant a holiday and she’s chosen the beach in Australia. As often happens the TARDIS takes them somewhere else. Yes, it’s in Australia but they’re on a salt pan, and something is wrong.

So many things I love about this story.

We get to see which incarnation of the Doctor is depicted. He’s very nicely drawn, and we’re not beaten over the head with it as the characteristics are gradually painted in. We do see his clothes through the eyes of an Australian.

I love that it shows us Australia. Not just the beauty of our country but also some of the problems. We’re shown that sunscreen is a necessity and that the heat our skin picks up when we’re outside in the sun doesn’t just dissipate as soon as we walk inside. It’s things like this tourists really need to know.

I love how we see an area of Australia that isn’t normally shown. The salt flats depicted are rather desolate and that illustrates vast tracts of Australia. Our land mass is about the same size as Northern America but we have a small percentage of the population. That is because we have large areas which are unable to be populated by modern people. You’d need to have a totally different way of living in order to live in these areas.

The writing. It is very good, we are shown things rather than having them rammed down our throat. By the end of this story I understood why Canavan receives awards and sells so well.

If you’re a Doctor Who fan, or you love science fiction, or you just love good writing you’ll almost certainly love this book. It’d be a great book to buy and read while you’re self-isolating, or in lockdown. Here’s a link for you.