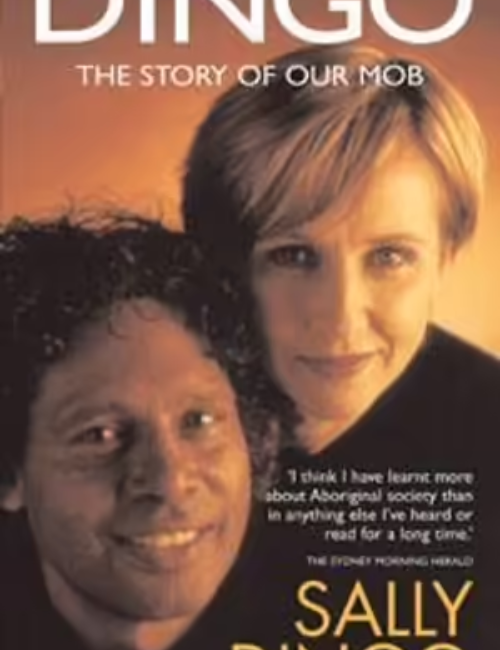 This is one of those books I wish I’d read years ago, many years before it was actually written…there’s a problem there. First published in 1997 it was written by the wife of Ernie Dingo. If you’ve not heard of Ernie Dingo you really should google him and find out more. I’ve been aware of him since he popped up on Fast Forward in 1989. Some of his skits were rather on the edge and poked fun at racists.

I’m going to be really careful with my words today. I’ve learned a lot from this book and I don’t wish to give offence. I’ll be referring to people who have died, not with their names, but with their relationship to Ernie Dingo. I’ll also substitute words or phrases instead of using the words dead or died.

Ernie was born in the Murchison region of Western Australia, he is part of the Yamatji people and has been designated as an Australian National Living Treasure. This book is beautifully written. We see how the Dingo family name began with the passing on of Ernie’s grandfather in 1948. Dingo was given by the authorities as a surname on his passing.

What I’ve learned from this book is how the Yamatji people grieve. And grieving is a natural part of letting people go from this life. In Judaism we have a system whereby we let the person go, have a period of grieving and then gradually move forward into normal life. A similar system is very obvious in the Yamatji people. They have to meet in a certain order before the funeral and cry together, each person cries with others in their turn. The book also shows how, and when, the grieving period comes to an end. The entirety of it makes sense, everyone is included, everyone gets a chance to grieve properly and it’s all done in a specific order so that everyone knows when their turn is due. That, and the completion, some months later, must make it very much easier to cope. I often look at people who don’t have a religion to guide them in their grief and wonder how they manage.

I fell in love with Ernie’s grandmother. She was the cornerstone of life, coping with everything that came her way. This included eight children (one of whom passed on at a very young age). She showed them how to live with very little, she looked after their children to enable them to earn money. She did this with very little money amidst a racist nation. The book shows how spotless her house was. I cried when I read about her passing.

The author does not mince her words in describing how hard the family worked, nor how bad things were for them. She includes how Ernie’s uncle tried to apply for Citizenship and was knocked back. It illustrates from the Indigenous side how they weren’t even considered part of the human race in those days. This supposedly changed in 1967 with the Referendum, but the book shows that nothing seems to have changed for Ernie and his family. They were still on the receiving end of racism. For many years his Mum only received the Child Endowment from the government, she didn’t receive any other payment and the jobs she had doing other people’s housework paid very poorly.

The family lived on the edge. While they had jobs some of the time they were very poorly paid, being paid less than white people doing the same job. They were treated as less than the whites having to sleep elsewhere and often not being given a decent building to sleep in.

Ernie’s mother had been told education was the key. She insisted they pay attention, even following their homework over their shoulders. She read their school books when they were at school and was able to read a little by the time the news of her brother having gone missing arrived. It was in the paper before she could be told, she could read the words ‘man missing’. How horrible it must have been to have read that and intuitively realise the words were about her brother.

I could talk forever about this book, about the words which encapsulate so much of what they must have felt ‘to live without the promise of a future’. And about how Ernie managed to both break free from that and also stay locked in with the family. I could talk about how the family is just so welcoming to new members of the family. But I won’t, I’ll leave it here with the usual words. If you feel you want to read this book you can buy it here, it’s worth every cent.