Cook: From Sailor to Legend by Rob Mundle 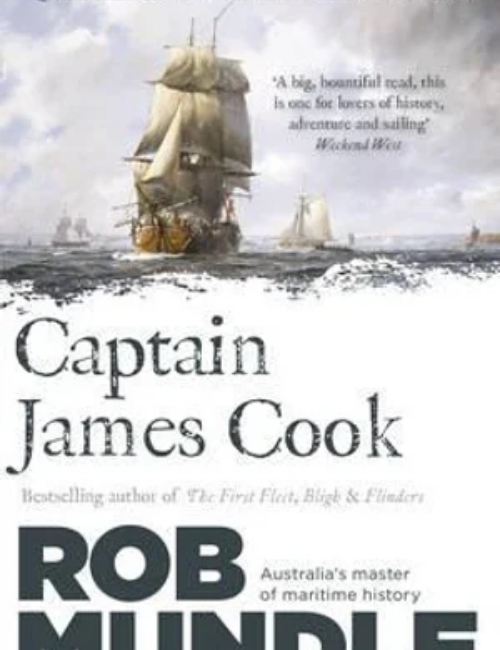 I think I won this book at an auction a few years ago, it’s sat on my To Be Read Pile since then. I pulled it off to read it because of its size. Yes, I was being sizist, reading a thick book makes a bigger gap in my pile. I headed into this book with interest. I’ve seen some rumours about Captain Cook of late and I wanted to confirm or deny. I hoped this book would do that and give me more information. It neither confirmed nor denied, but I did get lots of information.

Captain Cook is the man credited with finding Australia. Ignore that people from countries other than England had already found it, Captain Cook is given that credit. He mapped the bulk of the east coast including sailing through the Great Barrier Reef. How he did that is beyond me, but he did it and he didn’t founder and lose his men and boat. That part of the journey shows his great skill in navigating and managing a boat and its crew.

As we navigate our way through Covid waters people are distressed at not being able to see family and friends, at not being able to be with family and friends while they are sick dying. When I read about the multiple times Cook didn’t even get to see some of his children, they were born after he left on one of his lengthy trips and died during that same lengthy trip. I just muse on how things have changed. A lengthy trip back then was a year or two years, before Covid ours were mostly a month or two.

On one trip Cook took a Harrison clock. You can find more details in Dava Sobel’s book Longitude. I raved about it here. John Harrison discovered the secret of longitude and made the most beautiful timepiece that would work on a ship. Cook had one of these clocks on board his ship and that made his exceptional navigation even better. I enjoyed seeing the information in these two books dovetail so nicely.

It was on his third voyage that his behaviour became erratic. Previously he seemed to be even tempered, making sure his men were fed well – certainly better than other captains fed them – this included foods that warded off scurvy. Cook was the first captain to come home from a lengthy voyage having lost none of his crew to scurvy. But now he’s wanting to flog his men for little reason, with more lashes than normal. He had just spent some time on the Friendly Islands where he had revelled in the hospitality shown by the islanders. Later in the book a theory of proposed that Cook might have developed a stomach complaint which would result in this erratic behaviour. This theory was proposed 200 odd years after Cook’s death. But none of this went anyway to even addressed the rumours surrounding Cook’s death. Instead they show us that Cook was acting irrationally and that this irrational behaviour is what led to him being speared.

The author of this book has extensive sailing and maritime experience. This shows. One of the things I wanted from a book of this type is good descriptions of what the men would have been doing at specific times such as raising an anchor, or leaving dock. This is what I got. So many good descriptions. When I paid attention I was able to understand what the men were doing. And Mundle gave us timeframes, the length of time some of these procedures took. I was in awe of the crew, to be able to put their muscles to work for such a long time and then to go back again and again to do more.

Despite any complaints I might have made I did actually enjoy this book. I sat with my heart hanging out of my mouth through some of the descriptions. If you’d like to read this great book with lots of descriptions of sailing techniques and how Cook did some great things you can find it here, or possibly at your local bookshop.