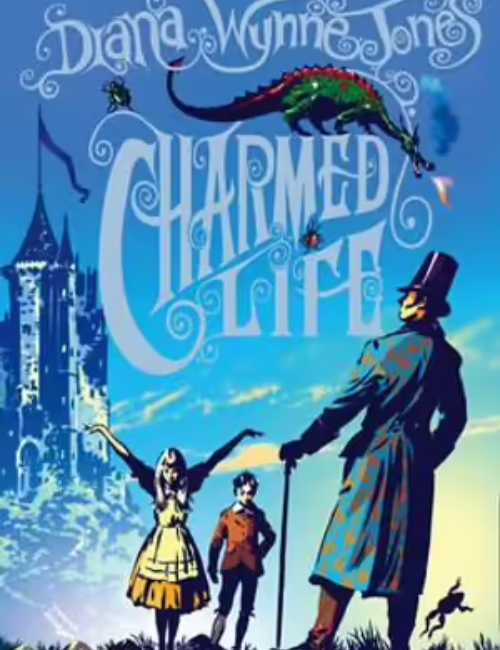 This is one of those books I could read many times and still enjoy. I rambled about it recently using a paragraph in Paratalk or Torque? It whetted my appetite and instead of being put back on the shelf it found its way to my To Be Read Pile.

On reading it I found I was right about the vicar and the repetition of the words ‘weak wandering’. There might be other interpretations and if you’ve read the book I’d appreciate your thoughts below. The vicar was a stark contrast to Gwendolyn Chant, she was the opposite of weak and wandering. She went straight for her goals in a very strong manner. I don’t say I like her goals but I do appreciate how she went for them. Sometimes it’s good to go straight for your goals, other times you need to creep up on them obliquely, you don’t want them to see you coming and run.

Having read the book again I now know what happened to Cat, and I finally understand why his nickname is Cat. Of course, if I tell you it’ll be spoilers and you might not want to read the book. On the other hand, the book is that good that even with spoilers you’ll probably still enjoy it. On someone else’s hand, I’ve read it before and didn’t understand Cat’s name.

It’s quite explicit, but there’s a reason for that non-understanding. When a book is that good I often don’t read a book properly. I have to school myself to read the entire sentence, or paragraph properly without skipping bits. But this is a skill I didn’t always have in the past, and bearing in mind this book was first published in 1977, I’m sure I’ve skimmed it a couple of times. Reading it this time I found myself slipping back into my old ways, with a couple of mental slaps, I reread those pages and found them an absolute joy.

Here’s one paragraph which gave me great joy.

Cat was impressed. He suspected that Mr Saunders was rather a powerful magician. Certainly, when he next looked at Mr Saunders, there was no sign of any ink on his back. Cat looked at Mr Saunders fairly often, to see whether it was safe to change his pen from his right to his left hand. He had been punished so often for writing left-handed that he was good at keepig an eye on his teachers. Whe Mr Saunders turned his way, Cat used his right hand. It was slow and reluctant. But as soon as Mr Saunders turned away again, Cat changed his pen over and got o like a house on fire. The main trouble was that, in order not to smudge the ink with his left hand, he had to hold the paper sideways. But he was pretty deft at flicking his book straight again whenever Mr Saunders seemed likely to look at him.

There are a couple of things in this paragraph. First, it’s written so we can really see Cat is being extremely careful not to be told off. He’s been told it’s wrong to use his left hand and therefore believes it. My Grandma was left-handed. They tied her hand down so she had no choice but to write with her right hand. But being the rebel she was she taught herself sign her name with both hands at once, only one of them was backwards. I recall her writing with her left hand only. And it makes a distinct different which hand you write with, even if you become proficient in your weaker hand. I damaged my right shoulder once, had it in a sling for a week or so. I think I fell up some stairs, you didn’t realise I had such talent, did you. I continued to attend classes and wrote with my left hand, very slowly and very awkwardly. By the end I was quite good but you could see a difference between the writing from each hand. So, when Cat is thinking that Mr Saunders can’t tell from his writing that he’s switching from one hand to the other then he’s just fooling himself.

Anyway, he does get into trouble for his writing. Mr Saunders yells and gets incredibly upset with people for making him use his non-dominant hand. Made Cat promise never to use his right hand. This whole section would be extremely gratifying to left-handers.

I totally enjoyed the magic we see depicted in this book. Some of it is big magic, some is very little. It’s all effective, but the children are given lessons in history, maths and other useful subjects. They’re only given lessons in magic when they’re ready. It illustrates how rounded school should be, you should never learn just one or two subjects, but you need a whole array of subjects.

In case I’ve whetted your appetite to look at this book, and potentially buy it, here is a link. I know it’s a children’s book, but that hasn’t stopped me reading it again.