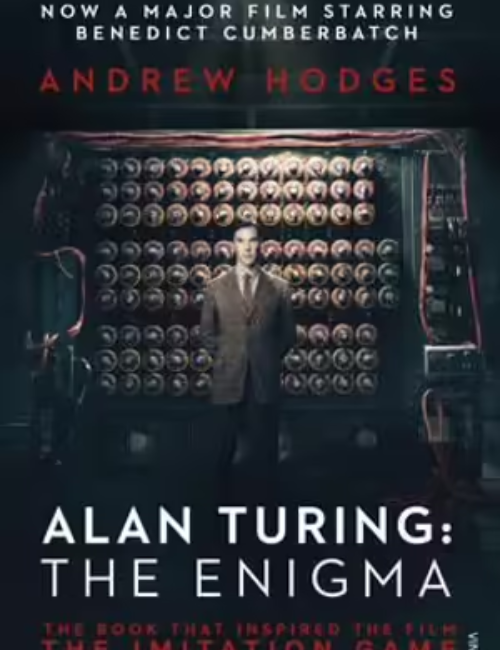 I’ve lost track of how many weeks I’ve been reading this book but last week I finally finished the last page. 540 pages packed full of information. Once I finished the book I wanted to then watch the two movies that have been inspired by Turing and his work: Enigma and The Imitation Game. The book and both movies are well worth the time. While absolutely fascinating, be warned there is lots of maths and some science in the book. That’s what slowed me down so much, if you’ve got a reasonable level of maths you might find it easier going. The last forty or so pages were much easier, there was some maths in there, but this mostly concentrated on his last days and explained why Turing might consider suicide.

Since finishing this book I’ve started another non-fiction book. It’s also in the science/maths field and it highlights some of the problems I’ve had in reading about Alan Turing. Hodges has written a fantastic book, on the front cover of my copy there is a quote from the New Yorker reading ‘One of the finest scientific biographies ever written’ and I’d have to agree with that until Dava Sobel started writing. Bearing in mind that Alan Turing: The Enigma was published in 1985 I find myself agreeing with the New Yorker at the point this book was published. Besides the information written in this book that was well above my level of understanding, I found this book was also written in a rather stodgy manner. Hodges research shows how deeply he’d delved into all the many possible places to find out just so much about Turing and what it must have felt like to have been such a brilliant man.

As is usual with all the biographies I’ve read this book started with a few pages about Turing’s parents in order for us to get some sort of picture of his background. One of the things it shows us is that Turing is different from everyone else around him, and how his Mum deals with some of these differences, this included finding the right public school for him so that he would not become a ‘mere intellectual crank’. By the age of 14 before he entered Sherborne Public School Turing was already showing a passion for chemistry. And while this passion changed to mathematics in due course he never forgot his beginnings.

I’ve made lots of notes as I read through and I’m going to ignore every single one of them. Some are thoughts for future stories, while others are just things that seemed interesting at the time. One of these includes the Turing Machine, named after Turing…it’s almost as if he was good at what he did and with that lighthearted note I’ll move on.

While reading this book I couldn’t help notice some of Turing’s characteristics. I’m sure that Hodges wasn’t going out of his way to tell us he thought Turing was probably autistic, but the fact that he didn’t look at people while he was talking to him was a big giveaway for me, on top of some other characteristics.

One thing that totally fascinated me about Turing was his marathon running. Even at the time he entered Sherborne he was already doing things such as cycling to school on the first day, admittedly there was a general strike and the trains weren’t running, but many people take that as an excuse not to attend school until travelling was easier, but not Turing. He essentially cycled sixty miles from Southampton to Sherborne, leaving his luggage at the train station with the baggage master, trusting that it would be sent on when possible. Some time later Turing took up running, and continued this for many years. He came fifth in the AAA Marathon, he could have gone on to the 1949 Olympic Games if it wasn’t for a leg injury. Here is he, a top mathematics professor of his age and he’s also a marathon runner.

Having finished the book I went on to watch Enigma a movie about Bletchley Park and how Turing lead the team in cracking the German code during WWII. It was a great movie, but it was dramatised quite a bit. Some of the dramatisation did a good job of illustrating some of the things I’d noticed in the book. What it didn’t do was use real names, and even then, the character of Alan Turing wasn’t really Turing, he was an amalgam of several people. But what he did show us was how Turing could concentrate to the exclusion of many other things, and how brilliant Turing was, and most importantly, how Turing didn’t really care for what other people thought. But this movie was not the movie about Turing, it was about the Enigma Project and Bletchley Park. I need to make that clear, it took me some time to shake off the feeling that it should be a movie about Turing.

And moving on from there I needed to watch The Imitation Game with Benedict Cumberbatch. This was the movie about Alan Turing. It showed us how brilliant Turing was, how odd he was, how homosexuality was illegal in those days and how he was probably autistic. Cumberbatch is a really good actor, I had to admire the writing. There were little bits that were not true to life but they showed us just how things were back in those days. It showed us that Turing hid his homosexuality when the truth was that he was quite open among his family and friends. It was only in 1951 when he brought a young man back to his house that it made headlines. The young man stole some things from Turing who reported it to the Police. It snowballed from there, but Turing never tried to hide his homosexuality from the Police. He was then convicted of indecent acts.

One thing I have not mentioned that I kept marvelling about. Alan Turing was key to the creation of the first computer. He did much of the background thinking and helped in its implementation. While reading I couldn’t help being amazed at watching the very beginnings. A couple of times I thought to myself of the computing power of the mobile phone in my pocket, something that totally outshines what Turing was doing, but without Turing I wouldn’t have that mobile phone. I often wished Turing hadn’t committed suicide so that he could see what we’d done with his beginnings, but I understand why he didn’t stay around.

I know I’ve complained at length about this book, but it is still a good book. I found myself coming back to it time and again for weeks until I was finished. I never really contemplated putting it down unfinished, it was something I mentioned but didn’t actually do. My TBR Pile is pretty huge and some of them are for research for more writing, but Turing was a compelling man and Hodges has made that quite clear to me. Admittedly I really like my men with brains.

If you’d like a marathon read here’s the book if you want to buy. Or if you just want to please me by clicking on the link.