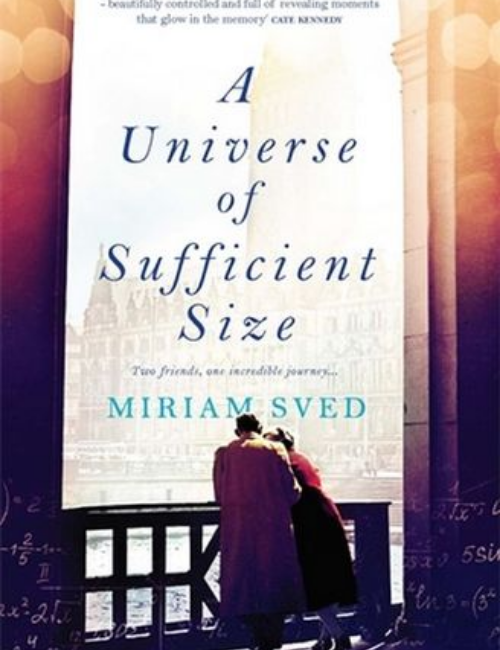 This is a Holocaust novel as opposed to a Holocaust memoir, biography or autobiography. Sved’s grandparents were caught up in the madness that was the Holocaust. They escaped and built a life, but before that they were mathematicians who met with other young Jewish mathematicians at a statue called Anonymous in Budapest. Sved has built these experiences of her grandparents into this story. All of these real stories makes this novel very powerful.

My heart was in my mouth at so many different points during this book, so much so that I quite forgot to make notes while reading. While at uni I wrote an assignment which spoke about the Holocaust. Researching it was an eye opener. I found out that much of what happened during the Holocaust was presaged by lots of little laws that curtailed what Jews were allowed to do, that opened the door for much casual antisemitism around Germany, and as it happened, also in Hungary. Some of those little laws are casually thrown in to this book. So casually I might not have noticed them if I had not known what they were. I can’t find an example of one of these laws, as I said before, I was so engaged I forgot to reach for my pen to note the page.

What you get in this book is some time spent in Budapest in 1938 with these five young friends, all varying levels of brilliant mathematicians. People for whom I would be very happy to make tea and cakes and just sit not understanding a word of their discussion. Some of the maths they discuss is mentioned in the Acknowledgements. Not that I ever thought it wasn’t real, just so far above my head it’s laughable. Told to us by Eszter, we learn what it is like living as a Jew in Budpest at that time. In the time of the Numerus Clausus where there are laws detailing how many Jews can sit specific exams and enter university, only one Jew may enter uni using an exam for one subject. If there are two people sitting the maths exam then the top person goes to uni. This is to reduce the number of Jews at uni.

As a counterpoint of that we see Ily, her mother and her two children. They have been brought up in Sydney, a long way from Budapest and the horrors of 1938. We see how they have their mother’s brilliance with maths and we finally see how they find out about their family story. We don’t really see the effect on them of that story, that is not part of this novel.

Ily’s daughter, Zoe, attends rallys to try and get Kevin Rudd elected. This is such a difference to Budapest in 1938 when any protesting was likely to get them beaten up and possibly thrown into prison. 1938 was a relatively safe time to be a Jew in Europe, much safer than 1939 – 1945 when there were various times when they’d be rounded up and put into concentration camps. 1938 was still a time when Hitler was trying to encourage Jews to leave Germany, long before the Final Solution.

I have spent all my time writing these words trying not to tell you why this book is so different for me. If I tell you then it’s spoilers and you might find you don’t need to read it. There are two things that make it different, the first is that it’s partially set in Hungary, and the other I really can’t say. Can’t or shouldn’t…probably shouldn’t. You will have to read it yourself, but it took me until about three quarters of the way through to find out what it was. And when I review, very briefly, from the beginning I find the clues are there but I just didn’t see them. More fool me for not reading carefully in the beginning.

Thank you to Pan MacMillan Publishers for letting me have a review copy. With this beautifully written book comes a recommendation to read it, you can buy it at Booktopia.