A Fortunate Life (condensed) – A. B. Facey 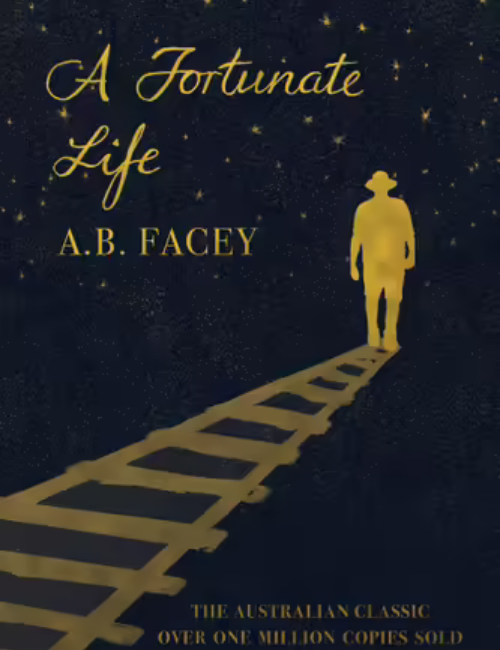 This is a condensed version of one of those iconic Australian books that I should have read many years ago, many years ago. Having finally read it I understand why. The writing in this book is not terribly sophisticated but the information revealed does show an incredible amount about Australian history, most of it white but some of it includes Australian Indigenous.

Facey had such an amazing life, his mother abandoned him and some of his siblings when he was young. They stayed with their grandmother who continually wrote to their mother asking for money and received nothing in return. He was sent off to work on a farm at the age of eight (not eighteen, but eight). This family overworked him and ripped him off. The next job was better, the couple even wanted to adopt him but his biological mother refused and the couple stopped treating him well. He continued working different jobs as if he was an adult, essentially growing up without parents or grandparents during most of his teenage years. He did see his mother and grandmother, the former just wanted him for the money while the latter loved cared for him but didn’t have enough money to look after everyone. One fact that seemed to occur throughout his life was that he was unemployed for very short periods, often moving from one job directly into another. He only exaggerated the truth about his work skills for one job and that worked out fine.

By the age of thirteen he had bought a gun and was shooting kangaroos and dingoes. The government paid good money for kangaroo skins and dingo scalps and he stockpiled a decent amount of money. Some time after he started learning to read and write. All the things he accomplished he did before he could read and write. He was sent to Gallipoli and came back from there with some damage. The book disagrees with the Wikipedia entry about the health issues Facey suffered from Gallipoli.

Enough of the story, I’m still in awe that he managed to get through his childhood intact and with money in the bank. There are three things I made note of while reading.

The first is about a gramophone. Bearing in mind that Facey was born in 1894 and that he’s situated in a remote area of Western Australia they didn’t have any modern amenities. I’m not sure what I’m saying is modern, but probably taps over a bathtub might be modern for that area at that time. I felt this was illustrated by the Edison gramophone Facey was allowed to use. It was a wind up gramophone with a large spring-like clock, it played two records before having to take the handle and wind it up again.

The next was in Gallipoli. There Facey saw a man with a donkey taking wounded men down to the beach. Simpson has been made famous by the work he did in Gallipoli for three and a half weeks until he died. He was a stretcher bearer and used a donkey to help with his work. He was reputed to have brought 300 men back to the beach, but this has been proven to have been an impossible number. Stories can take on lives of their own. There were other men using donkeys to transport wounded but Simpson is the most famous.

The last was also in Gallipoli. The men were digging tunnels under or near the Turkish trenches so they could explode charges. There’s more detail I’m not putting in here as it can be quite distressing. This work was highlighted in a movie in 2010 with an Australian war film called Beneath Hill 60. It’s a great movie, but with rather a lot of death and destruction. I found it interesting to see the contents of the movie played out in Facey’s autobiography.

I loved hearing how Western Australia was opened up for farming and settling. However, we don’t see much of the impact on the Indigenous in this book. We do see how white men view the Indigenous through Facey’s eyes and how that changed when they rescued him when he was lost in the bush. I loved this book, but would have preferred the full version. I’m giving you an affiliate link in case you want to buy the full version.