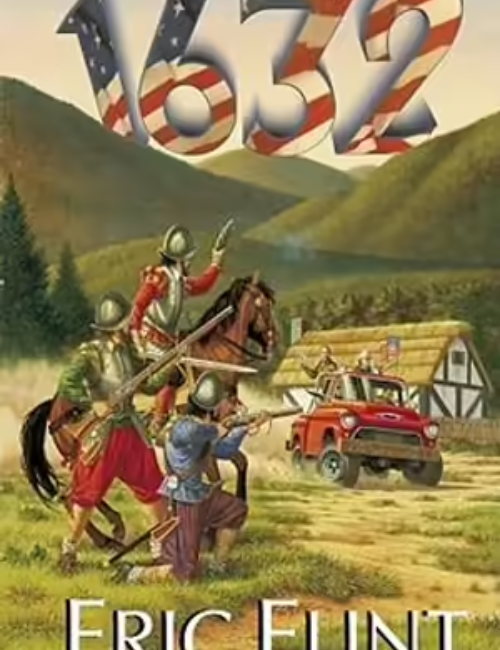 Recommended to me by a friend, this book is the first in a long series of alternate history books. There’s a smidgeon of scifi here but only to set up the idea running through the entire series. To explain the scifi. An alien culture has taken a six-mile piece of land from West Virginia in modern times and transposed it with a similar piece of land in the year 1632 in Thuringia, Germany. This is a few days after the destruction of the city of Magdeburg during the Thirty Years’ War in Europe. The people from Thuringia 1632 arrived in West Virginia already dead. The people from West Virginia were celebrating a wedding when they were transported to Germany. Most of the population of the area and some outsiders were at the local school celebrating when the Ring of Fire happened. They came out of the celebration and promptly took sides. It so happened that the side they took was that of Gustav II Adolf, King of Sweden.

What happens when modern weapons meets 1632 weaponry? It’s a blood bath, a total slaughter. The Americans sometimes hold back, but they know their history and when they figure out where and when they are they don’t hold back as much as I would have liked. I don’t plan on reading any more of these books. I think they were recommended by the friend because he thought I might be writing alternate histories, but I’m not really. I’m not planning of changing any written history in what I write.

But, if you’re considering writing alternate histories then this would be a good book to read. It certainly gave me food for thought. I quite enjoyed watching the author figure out what he was going to include and how the history might pan out if given a different turning point.

One of the problems I have with much literature is that Jews are depicted in a poor light. But in this book we begin to understand why this might have come about. It’s not a main theme of the book, just some little details which help give veracity to the whole. And that’s why I’m taking my time with research for my book, I’m looking for all those little details which make up society. I appreciated getting the details in the form of how would you know someone was Jewish. One group of soldiers were told to kill everyone, especially the Jews. But as they have no idea what a Jew looked like they just intend to kill everyone.

One of the little details which helped me to place the doctor was the word the Jew, Rebecca, used to refer to him in her mind. She used the very old word ‘moor’. It shows us that he was a person of colour. She was astounded by his competency. Although that emotion passed as she got to know him and understand the culture more.

My other problem with this book is the romance. If you’ve read much of my writings you’ll know I’m not a fan. There were three couples in this book who seemed to fall in love incredibly quickly. Two of them were at first sight, or very close to that. One man fell in love with the young lady he rescued. And that one really irritated me. When you’ve gone through something life changing, such as a battle, then you’re naturally drawn to people who have been through this same event. Men who have fought together have stayed friends for decades, and to me, this is the same thing. So, Jeff leapt to the defense of Gretchen (by the way, she’s apparently stunning once she’s been washed and dressed) and instantly is drawn to her.

So, between the romance and the battles which are so one-sided I don’t plan on reading the rest of this series. I don’t mind reading about wars, but not where one side has so many more advanced weapons than the other. I quite understand that other people would love this book. The man who recommended it to me loves romance.

If you feel like clicking through and looking at the book, it’s here. And you know that every click makes me happy.