We drove to Canberra earlier this year. As normal I don’t tell the world when we’re going away, it’s something you find out later. The reason was to view my Great Uncle’s Log Book from his time in WWII. He was a pilot and this book shows the time he spent training and then flying. It shows the position he was in, whether as a pilot or elsewhere in the plane. And it shows what he flew as well as the time spent flying. The last entry is poignant as it shows him missing. We know he was shot down over France and is now buried there. My emotions were very mixed to see this book.

While in Canberra we tried to view some of the sights. I was hoping to see the Sound and Film Archive but parking there was absolutely shocking and although we tried twice it just wasn’t possible. It was potentially possible to walk from the hotel but I decided against that. What we did do was take a wander around Parliament House. I took some photos which I’m sharing here.

This book tree is very clever. While I don’t like destroying books these books were going to be pulped anyway.  I did wander round the back and notice the books were no longer of use but I didn’t notate what they were. If you look at the next photo you’ll notice they’re probably old Hansard records (transcripts of Parliamentary debates) which are now kept in digital format. Yes, I’m giving you photos out of order. 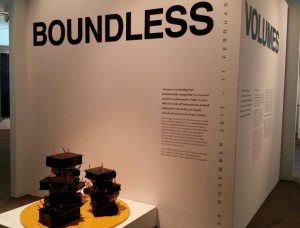 I quite like this one. It just appeals to me for some reason. The photo is good enough that you can zoom in and read the print on the board. Essentially the excess volumes of parliamentary records have been given to artists to work their magic with them.

I just wanted to celebrate this use of the written word. It’s a book that is no longer needed and the artist has carefully extracted some pages and made them into origami. I just think people are so clever.

This really caught my eye. All of these parliamentary books have been piled up with one book on top. The words Still Don’t Count have been inscribed in the pages of the top one. You can’t see the word Count as I’ve not photographed it, I felt leaving this one word out was very poignant and spoke to the entire debate.

Here’s some history for you. When white man came to Australia they assumed the country was not inhabited, essentially telling people that the Indigenous weren’t human. This made it easier for them to take over the country. They were disenfranchised, marginalised and many attempts were made to wipe them out completely. Before white man there were around 273 nations in this country, mostly getting along very well. In 1967 there was a successful referendum held to change the Constitution and include the Indigenous in the population count. Meaning they’re finally counted as people and not as fauna. While this was an incredibly big step in Indigenous and white relations it had little actual effect at that time and the fight for equality is still ongoing.

I did try to take individual photos of the top book. This first one didn’t come out too well so I stopped. In hindsight I feel the photo is far more powerful than I first thought and I’ve not altered it. Normally I crop photos to make them fit better or cut out bits that are irrelevant but I couldn’t find any part that wasn’t relevant in this. Each black pixel I felt spoke to the entire and I feel it represented one small part of the Indigenous. It felt wrong to cut out even one pixel.