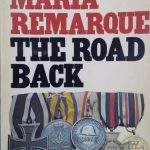 The Road Back by Erich Maria Remarque
Published by Mayflower/ Granada on 1974
Pages: 208
Goodreads

Peace has come. The last tortured flames of history's most brutal inferno have died out. And now the soldiers - the survivors, the 'lucky' ones - brutalized by four years of living Armageddon, return to a shattered post-war world.

This is the sequel to All Quiet on the Western Front. If you think I’ve read the first book you are very much mistaken. I rarely read books in order, why should I start being sensible now?

From what I can gather All Quiet on the Western Front is about World War I, the Great War, the war to end all wars. I’ve read books about WWI before but this one is from the German point of view. The Road Back is the sequel, it starts in the last day or two of the war. It gives us some idea of how it feels to be in the trenches, to be sheltering from gunfire, to be losing mates. It then moves onto what happens after that.

It’s this first point that interested me to start off with. Because they’re fighting on the same continent as they live they are able to get back home with little difficulty. If they were Australians or even British they would have had to embark on boats to get back home, but because they’re Germans the road back is much less troubled, physically. They get back by walking and by hopping on a train. They do end up back in their home town, going back to their old life but it takes them much longer to go back for the emotional parts and some of them never manage to heal.

Where we go from here is to see how damaged these young soldiers are. Some of them commit suicide, while others have a nervous breakdown. What’s really hard is that we see one nervous breakdown from within the man’s head.

I really recommend this book, if you’re in a good emotional state of mind. Here’s the affiliate link for you so you can make up your own mind. It’s being published in November this year under the title The Way Back.