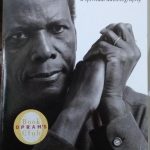 The Measure of a Man: A Spiritual Autobiography by Sidney Poitier
Published by HarperOne on January 26th 2007
Pages: 243
Goodreads

In this luminous memoir, a true American icon looks back on his celebrated life and career.  His body of work is arguable the most morally significant in cinematic history, and the power and influence of that work are indicative of the character of the man behind the many storied roles. Here, Sidney Poitier explores these elements of character and personal values to take his own measure - as a man, as a husband, and father, and as an actor.

Poitier was uncompromising as he pursued a personal and public life that would honor his upbringing and the invaluable legacy of his parents. Committed to the notion that what one does for a living articulates who one is, Poitier played only forceful and affecting characters who said something positive, useful, and lasting about the human condition.

Here, finally, is Poitier's own introspective look at what has informed his performances and his life. Poitier explores the nature of sacrifice and commitment, pride and humility, rage and forgiveness, and paying the price for artistic integrity. What emerges is a picture of a man seeking truth, passion, and balance in the face of limits his own and the world's. A triumph of the spirit, The Measure of a Man captures the essential Poitier.

Author Biography: Sidney Poitier was the first and remains the only African American actor to win the Academy Award for Best Actor for his outstanding performance in Lilies of the Field in 1963, but he believes that will soon change, given the excellence of African-American talent in the industry today. He has starred in over forty films, directed nine, and written four. His landmark films include TheDefiant Ones, A Patch of Blue, Guess Who's Coming to Dinner, and To Sir, With Love. Among his many accolades, he has recently been selected as the thirty-sixth recipient of the Screen Actors Guild's highest honor, the Life Achievement Award for an outstanding career and humanitarian accomplishment.

You might possibly have heard of Sidney Poitier. He’s famous for being the first actor of colour to win an Academy Award for Best Actor and a Globe Aware for Best Actor, that was only in 1964. There are some people who need to push boundaries and break new ground, Poitier is one of them.  He’s inspirational in many ways, I’m not saying this book will show much of that as it depends on the reader. I certainly found it all there laid out just waiting for me.

Born in 1927 in a tiny place called Cat Island, part of the Bahamas, he lead what we might consider an idyllic life for the first ten years of his life. The family had little but it made them treasure what they do have, just reading about how his mother would light a candle for a short time at night made me look around at the amount of lights I turn on without thought and I am amazed at how much I have. He spent a lot of time outside learning about keeping himself safe and learning how to push boundaries.

Poitier grew up in an almost black culture with only two white people on the island. He didn’t understand colour meant in relation to people. This meant that when he went to live in America he didn’t model any of the preconceived ideas the whites have about blacks. He didn’t realise he was in the minority and that he was supposed to kowtow to the whites. He then had to understand why the whites behaved in a superior manner to him and figure out all the baggage that goes with that kind of behaviour. And going into the entertainment industry would have been hard as he would have been expected to play all sorts of demeaning characters. Thank goodness he had the spine to stand up to that sort of nonsense and refused to play characters that didn’t ring true to him. This brought him to the role in To Sir With Love…go and watch it, it was ground breaking in its day.

Poitier raises the thought that people need real life interactions in order to grow and develop. He notes some studies he’s read on young chimps who have been raised using a mother created from wire and with a bit of fur, a perch and an arrangement to get milk through the nipples. These chimps withered and died as they were missing the interactions from their real mothers. He feels that as we move more and more from the simplicity he had on Cat Island and move to more concrete and steel that our ‘souls will wither and die as a result’. What I’m wondering is if some of us are already there. I’m trying not to be political here but I can think of many politicians who are so far removed from real people and real life that they have stopped thinking of people as people and instead think of them as units. I’m sure you can join the dots there.

Should you wish to have all the fun of reading it just like I have then it is available using this link. If you click and buy through here I might even be able to buy a coffee… this website has made me so much money, a grand total of $8.99. I’m not in it for the money but it’s nice to get a little back.