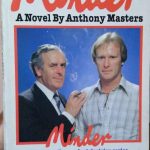 This is a novel of the popular English comedy series of the same name. The programme ran from 1979 to 1994 and was sort of rather funny. I won’t say I’ve watched all the episodes but I’ve watched enough, one day I’ll revisit a couple of episodes and see how they stand up to modernity.

George Cole plays a slightly shady Arthur Daley while Dennis Waterman plays his long-suffering employee, Terry McCann. The Executive Producers were Verity Lambert and Lloyd Shirley. There’s a chance you’ve heard of Verity Lambert, she produced the first episodes of Doctor Who. Without her Doctor Who would either not have seen the light of day or not be as good as it was back in 1963. She could be described as the mother of Doctor Who. Lloyd Shirley also has a good work history having produced many episodes of The Sweeney and The Bill among others.

I happened to notice George Cole was in a St Trinian’s movie, not the remakes, but one of the original movies – he was very young. Dennis Waterman is still working, if you saw New Tricks you would have seen him as Gerry Standing.

I’ve borrowed this book from The Little Library in Melbourne Central Station. It will be returned soon, don’t ask me how long I’ve had it.

I found this problematic. The writing is fine, and in another era I would have enjoyed it tremendously. I think the problem is that I’ve been edumacated in writing stuff and sexism and I’m now looking for more highbrow books, books that expect me to learn from them and books that might have messages that I have to work hard to see. This is none of the above. It’s good solid writing that shows you what Arthur and Terry actually did. At times we see through Terry’s eyes, sometimes we see the events through Arthur’s eyes. I enjoyed it for all of those things. What it helped me realise is that when I used to watch Minder I enjoyed it more for the acting and the scenery than for the situations or how Arthur was getting himself into trouble. For that alone, I thank Anthony Masters.

One part I enjoyed for no other reason than it was incredibly funny. Arthur in a business deal, Terry is the ‘valued employee’ who has to man three phones. The office is close to a railway station. The phones turn out to be pay phones at a railway station. The stationmaster has been bribed to put up ‘Out of Order’ signs for three hours every day. Flyers have been distributed in many places and the phones ring. Cue giggles.

I terribly missed the body language and the accents. These are things that are challenging to put in print. Until I read this novel I hadn’t realised how much I relied on those two things to enjoy any TV programme.

I wasn’t able to find this book available for sale so I’m not putting up an affiliate link. If you can find it at a library or second hand book shop I suggest you read it just because.