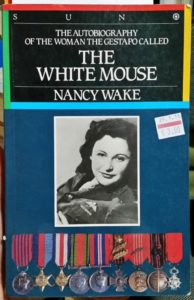 The Autobiography Of The Woman The Gestapo Called The White Mouse by Nancy Wake
Published by Sun Books on January 1st 1970
Pages: 200
Goodreads

The Gestapo called her the White Mouse. Nancy Wake, an Australian who became one of the most highly decorated women of World War II, here tells her own story.
After living and working in Paris in the 1930s, Nancy married a wealthy Frenchman and settled in Marseilles. Her idyllic new life was ended by World War II and her work with an escape-route network for Allied soldiers. Eventually Nancy had to escape from France herself to avoid capture by the Gestapo.
In London she trained with the Special Operations Executive as a secret agent and saboteur before parachuting back into France. Nancy became a leading figure in the Maquis of the Auvergne district in charge of finance and obtaining arms, and helping to forge the Maquis into a superb fighting force.

What is there to say about this book?

Not much except that I absolutely loved it.

I knew of Nancy Wake long before I saw this book, I knew a very small part of her story and I knew that she was an amazing woman. What I didn’t know was how amazing and how much she was hated by the Gestapo, nor how much she lost by her actions.

This book details much but also glosses over much, if she’d written enough detail to satisfy me then it would be a much longer book and would be more of a diary or text book.

Wake was a journalist before World War II so she already had the writing skills to make her point come across and it shows in this book. In many autobiographies I read there is a formulaicness as if some parts of them are written by someone entirely different to the author. This is what I don’t get in this book. What I get is Wake’s lively, bubbly personality and the feel as if she’s written the whole book.

Absolutely and totally. But not if you have problems with details of torture, although you can skip those parts. Wake is open and above board in giving us details we often don’t want to know about but really we should. In fact, here’s the link to Booktopia so you can buy it and give me a very small percentage. But buying is optional, there are libraries.