Sydney Alexander Wakefield (13 May 1927 – 22nd August 2009) was an inspiring Australian writer who is best known for the well known and loved – Bottersnikes and Gumbles series of children’s books. I can find very little about Wakefield, the only other piece of information is about him writing another book, Captain Deadlight’s Treasure. 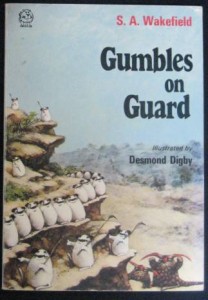 I recall Bottersnikes and Gumbles from my childhood, they’re wonderful books full of delight for children. There are four books in the series they were written over a 20 year period so Wakefield didn’t rush his writing. I’d like to know what else he did. I went to Trove and found nothing. 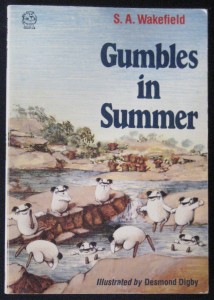 Looking further afield at Desmond Digby, the illustrator of the Bottersnikes and Gumbles books I found even less. Wakefield at least has a Wikipedia page but Digby doesn’t even have that. I did manage to find some gems on Trove, such as this one, where Digby illustrated the original poem of Waltzing Matilda by Banjo Paterson. This book was only the second illustrated book considered worthy of an award in the 14 years prior to 1971. This one is interesting it shows Digby to be a successful painter donating a lovely painting to an art auction in 1963. There was a lot more about someone called Desmond Digby, if I was doing a biography about him I’d be looking at all of them and then following them up but this article is meant to be celebrating Wakefield on the anniversary of his death. 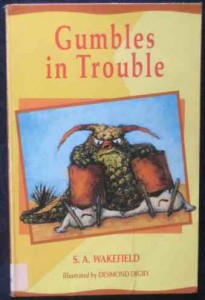 Wakefield wasn’t above putting messages into his stories. There are two that are very appropriate to Australia at the end of June 2013 when we had a change in Prime Minister from Julia Gillard to Kevin Rudd. If you read Gumbles in Trouble you can see how Wakefield feels about the media. If you go back to Gumbles in Summer you’ll read enough about politics to sink a battleship…maybe not a battleship but it is enlightening.